After a week of sending fans scrambling around the city in search of golden tickets, the pun-loving artist Hanksy opened his Best of the Worst show last night in an abandoned bank on Delancey Street. 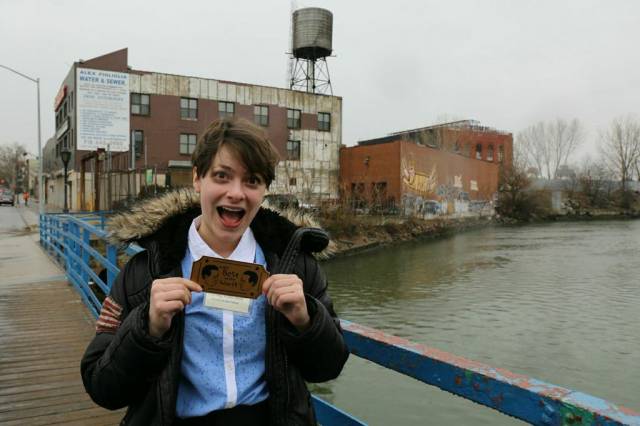 One of the golden ticket winners. (Scott Lynch/Gothamist)

The highly anticipated event—the last show Hansky organized, Surplus Candy, lasted only three hours—drew hundreds of people to the Lower East Side, and when the doors opened at 6:00 the line to get inside stretched around the corner and well up Essex Street. Less thrilled about the whole thing was the NYPD, and within an hour Hanksy was told he had to either disperse the folks on line or shut down the show.

For those of you who didn't get inside last night, Best of the Worst will run all afternoon today, from 12 noon to 6 p.m., and will likely be much less of scene. 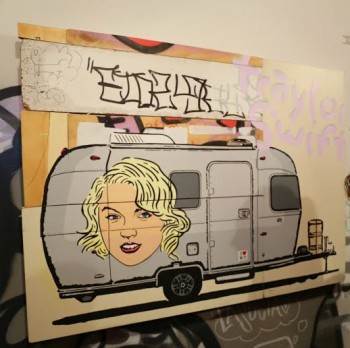 Best of the Worst featured about 20 or so of Hanksy's signature punny pop-culture pieces, including portraits of Bill Murrito, Hamuel L. Jackson, Kanye Brest, Traylor Swift, Pikajew, Drak-o Malfoy, Mile E. Coyote... you get the idea.

Joining the general mirth and mayhem were a ton of Hanksy's street artist buddies, who had been tagging up the place for days. The walls were covered with contributions from the likes of Left Handed Wave, Frank Ape, Magda Love, Clint Mario, Gilf!, CB23, Don't Fret, Lexi Belle, Nda, Elle, Roycer, Joseph Meloy, Beau, Claw Money, Tony Depew, and Col Walnuts. Most of these guys also showed up to the party, as did many other graffiti writers and artists, and so, inevitably, the layers of tags and stickers got thicker as the night wore on.

But it wasn't just about art! Hansky tricked out the old bank with a skate ramp, which got plenty of use from, among others, Wizard Skull and Ethan Armen's dad. There was also a free photo booth, lots of free PBR cans and dumplings, free pinball and Ms. Pac-man, and a DJ cranking a solid mix of new and old-school hip hop with a bit a first-wave punk thrown in as well.

By far the most popular party game, however, was what I guess you'd call "Wear a Penis Balloon." Yup, Hanksy hired a balloon artist who would only make penises, albeit in an impressive range of shapes, sizes, and, um, degrees of excitement. This kept everyone happy and busy for a big chunk of the night.

Best of the Worst continues today from 12 noon to 6 p.m., and is located at 104 Delancey Street, between Essex and Ludlow.

#hanksy
#street art
#the best of the worst
#original
Do you know the scoop? Comment below or Send us a Tip