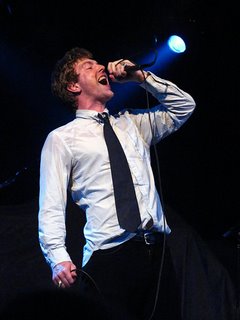 Hamilton Leithauser's voice sounds older than its years. The singer of The Walkmen adds an experienced rasp to the band, and if there's any innocence to counterbalance, you'd have to strain to get a glimpse. Leithauser has often been compared to Bob Dylan (when Bob Dylan was at his best); a barstool baritone with a troublesome tone. The Walkmen are just about to put out their fifth album, You and Me, and in support of that they'll be playing Bowery Ballroom early next week [tickets]. This week Leithauser told us a little about how the Chinatown bus played a role in their latest release.

The new album sounds amazing, how long have you been working on it for? Thanks very much. We worked on it for a little over two years.

I read that there were a lot of Chinatown bus rides that went into the making of it. Can you elaborate? Yeah Matt and Paul live in Philadelphia now so in order to practice either we've gotta go down there, or they have to come up to NY. The train is too pricey, so sometimes we take any of those cheap busses. There are so many now. I travelled from NY to DC recently on the Bolt Bus for $10. That's just a hell of a deal.

Were the bus rides inspirational or just soul crushing? It can get so rough on those things. It can smell just unreal and sometimes they make these really weird unannounced stops, where there's some guy standing in a parking lot and the driver will just pull up, open the door, scream something at him in Chinese, and then drive off.

Having been around for a while, how have you seen things change in the music scene? Do you think online outlets like MySpace or blogs have changed the game at all? Definitely. There's no more waiting for a release date to hear a record. When I was little I remember sitting around the radio, hoping they'd play the new Guns and Roses songs...I guess kids don't have to do that any more.

You guys had been working on a book, is that still happening? It's been a while since we were writing. I hope we start up again soon. We'll have to get really, really bored of ourselves first though, because that's when the best stuff gets written.

You've been described as a movie buff, what have you seen recently that you'd recommend? I would recommend "Deep Water", a documentary from I believe last year, about the race to be first to sail around the world in a single-man craft...it is truly bizarre. I thought Batman was very good...I liked how long it was. I loved Wall-E. I don't know why but I recently rented "Witness" starring Harrison Ford and Kelly McGillis...it was weirdly budget, which is what I liked about it. I watched "Aguirre: The Wrath of God" again recently...it's fantastic.

Which New Yorker do you most admire? I liked the one from the beginning of June, with Barack on the cover. Ayayay!

Given the opportunity, how would you change New York? I wish the street cleaning would be 2 days a week instead of 4. I read an editorial on in the Times recently and was really hoping it would happen, but I don't think there's any real plans. It is just impossible to deal with. I just got a $65 ticket this morning on the van.

Under what circumstance have you thought about leaving New York? I don't. I love it here!

Do you have a favorite New York celebrity sighting or encounter? I saw Old Dirty Bastard once just before he died at some bar near Union Square. It was a treat. He was really swollen and he didn't look very healthy.

Best cheap eat in the city. Tabtos on 5th and B.

Best venue to see music. I like that United Palace Theater up at 175th and Broadway.