This is the week for continuously unwrapping miniature size candy bars while staring wide-eyed at a scary movie. While most of the good horror flicks are from the VHS-only days, we live here, in the future, where everything is streaming online. Below, a list to get you started on your Halloween binge-watching—from the stupid to the actually scary. 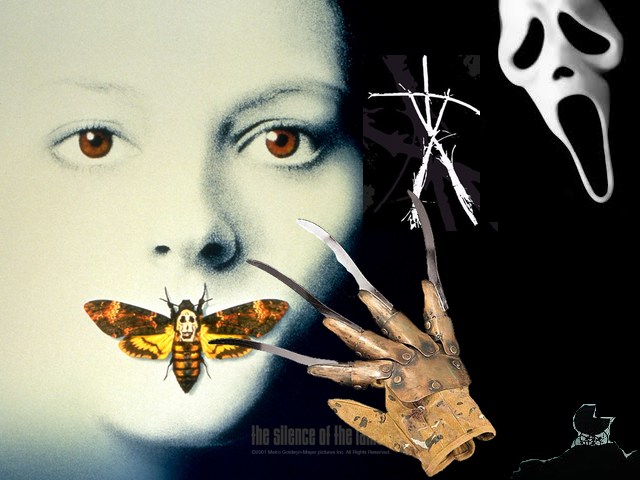 You cannot go wrong with a Wes Craven-directed slasher flick. Scream, the 1996 kick-off to what would be an ongoing franchise, is the best of the bunch, featuring a masked killer, home alone scenes, breathy phone calls, and plenty of scenarios that will have you yelling, "DON'T GO IN THERE!" The movie stars Neve Campbell, Courteney Cox, David Arquette, and who can forget that suspenseful phone call fielded by Drew Barrymore to get things going?

The Thriller: SILENCE OF THE LAMBS, 1991 (Netflix)

Have YOU been able to drive down a dark road blasting Tom Petty's "American Girl" since this movie came out? Maybe it's those moments peppered with pop culture pieces that make this movie seem So Real, like maybe it could be you trapped in a well putting lotion in the basket. Or maybe it's the dynamic between Jodie Foster and Anthony Hopkins that elevates this into one of the greatest thrillers of all time. If you choose to open the door into this dark world again, you can do so on Netflix, and be prepared for more than a few hold-your-breath moments... or else it gets the hose again.

The Surreal Suspense Flick: THE CABIN IN THE WOODS, 2012 (Amazon Prime and Netflix)

Drew Goddard and Joss Whedon, the men behind Buffy and Angel, created this weird world in just three days. The A.V. Club wrote: "Where Scream put a postmodern twist on slasher films, The Cabin in the Woods takes on the whole genre and twists even harder. The script brings to the fore Whedon’s love of subverting clichés while embracing them and teasing out their deeper meaning." You'll get a girl making out with a mounted wolf head, plenty of dark, scary shit happening in the basement, and a TWIST.

The Hoax: THE BLAIR WITCH PROJECT, 1999 (Netflix and Amazon Prime)

Listen, in 1999 the internet was different, and you couldn't exactly ruin a movie like you can now. So when my friend got her hands on a pirated VHS copy of The Blair Witch Project before it was actually out, I believed it was real. The movie—which was advertised to us mostly word-of-mouth, urban legend-style—was said to be made entirely from "found footage." It was scary because you thought it was true, and that made it good. Watching it knowing what we know now is probably less fulfilling, but if you've been wanting to revisit it, you can do so for free.

In elementary and middle school I was Freddy Krueger at least three times for Halloween, and not one person in my family was even a little concerned about that. It's been a while, but Freddy Krueger is certainly worth a revisit. The movies are classically constructed Hollywood horror, built to make you scream like a rollercoaster, but so unreal that I never thought I'd get sucked into my bed like Johnny Depp did. Since Nightmare On Elm Street the original isn't streaming for free online, we'll have to recommend the second one (which Wes Craven actually refused to be a part of). Bad scary movies are sometimes the best ones...

A couple of years ago we asked a series of people what their favorite horror movie was, and this one came up the most. Chris Eigeman called it, "The scariest film in the world," telling us, "It will scare the piss out of you at every stage of your life; when you're young and clearly willing to make a deal with Satan for a role on Broadway (or whatever your career is) and then your wife wakes up with claw marks on her back. When you're older and having a kid, I promise, you won't even whisper the fucking title to yourself. And then when you're older still, you realize that most probably we are all Ruth Gordon and Sidney Blackmer; we seem so dear, so helpful, but have long been recruitment agents for the devil."

Note: Sadly, the original 1978 Halloween appears to be nowhere online (though you can watch the the 2007 remake from Rob Zombie on Amazon Prime). Same goes for Poltergeist, which was probably responsible for most of our clown fears :(