Haim's Alana Talks About Going From Small Clubs To SNL

Haim has gone from playing small clubs in LA and Brooklyn to being the musical guest on Saturday Night Live in under two years. The three sisters from the San Fernando Valley have been described as "nu-folk-meets-nineties-R&B," which is much more accurate than their frequent comparisons to Fleetwood Mac. This weekend they play two sold-out shows at the massive Terminal 5, and ahead of that Alex Tween from the New York band The Forms talked to Alana about the band's fast lane to success. 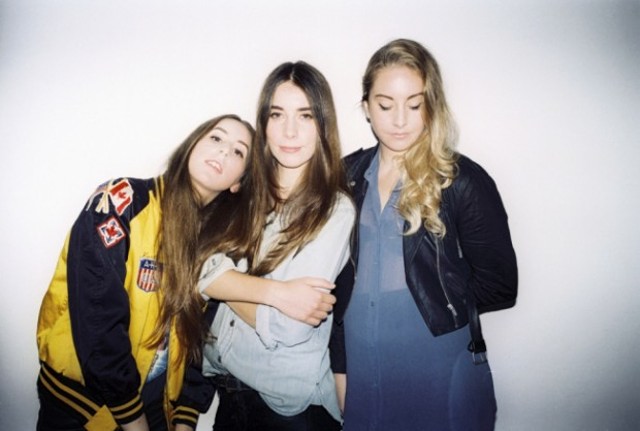 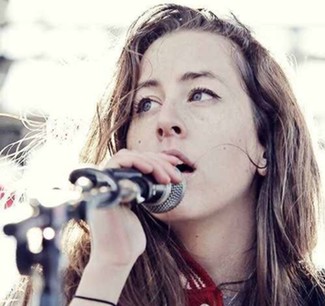 Follow Alana on Twitter
About two years ago you played a small club in Williamsburg called Glasslands and a year and a half later you’re on Saturday Night Live, and now two sold out shows at Terminal 5, it sounds like it’s been a crazy ride. How are you holding up?

It’s really crazy. I think mostly because when you’re living in LA, playing in New York was kind of like this crazy, unattainable thing. “Oh, I hope we go to New York one day.” But in the past two years, we’ve played New York more times than we’ve played LA. And we’re always so surprised because comparing New York to LA crowds, LA crowds are very tame and in New York we’re always thinking “It’ll probably be a lot like LA.” And every time we’re in New York we always get reminded of how crazy and rowdy New York audiences are. It’s just so much fun to play in New York. It’s fun to play in LA also because it’s my hometown, but it’s crazy to come to New York and play these crazy shows. And my 21st birthday I played a show in New York, it was Santacon where everybody dresses up as Santa for a day, and so the craziest show I ever played was that 21st birthday. It was the best 21st birthday I could ask for.

Yeah, Joni Mitchell. That’s a great song. Because it was only three chords. It was B, D, and E—the easiest chords to play on guitar. I remember her teaching me that one being like “Whoa that’s so cool!”. I remember practicing those chords over and over again. I thought I was a rock star when I was like 8. Like “Oh yeah, I’m super cool, I can play C, G, and E.” A song that we first played together that I remember liking, I guess I’d go with “Brown Eyed Girl”. I just remember we all loved to play that song. Este loved to play it because of the epic bassline. It was a nice, solid bassline so she could show off a little bit. So that was the fun song to play. It was pretty epic.

It’s funny you mention basslines because that leads me to my next question. Your album Days Are Gone I think is one of the best albums to come out in years, and one of the things I really appreciate about it is that I’ll listen to a song like 30 times, and then on listen 31 I’ll notice something I’ve never noticed before that is really good, like the bassline of “Forever”, which is incredibly rhythmic and unpredictable. So the detail and effort that’s put into the music is staggering on a level that virtually no other bands do anymore. So I found myself thinking, “How do these songs get written? What was the process to make this music?” Well, it’s kind of a crazy process. Writing is super simple—kind of get in a room and one person will bring in a drumbeat or a melody and it just kind of goes from there. But I think with Days Are Gone, we had so much fun with the production part of it because we found two producers that really listened to us. We had Ludwig Göransson who did “Forever”, that’s the only song he did on Days Are Gone, but he did our first EP and he was the first person to listen to us, so when we found out there were people we could actually collaborate with, because collaboration, it seems like such a simple thing, but its really hard to find someone that you can truly collaborate with.

We’re not just one person, we’re three people with three different opinions on things and sometimes we’ll clash on things and Ludwig would have to choose and figure out everything out, so it’s a long process. But Ludwig was the first person who was open to collaboration and would never get flustered with us, and was happy to do it. So when we thought about doing Days Were Gone, we met Ariel Rechtshaid and James Ford, and they were the same way. Especially with songs like “Running if You Call My Name”, “My Song 5”, all those crazy songs that come out of nowhere, he would be up for anything. So we would be doing some weird thing and he would never be like “Let’s go back to that”. He would say, “Let’s explore it right now”. So it really gave us the room to feel really open and throw things against the wall to see what sticks.

There’s a point where you can put in too much on a song. I hope that doesn’t happen on the record, because there’s definitely songs that sound like they have way too much shit on it. But It was really fun, making it seem like it was ok to put the producer hat on for us and to really put everything into the song that we wanted to.

I think all of the details like that are what make it such a great record. So, from my own perspective, I find it kind of frustrating how the media focuses so much attention on the band’s appearance, your hair, the weird faces Este makes while she’s playing, and not enough attention is paid towards how good the music is. As someone in the band, do you feel like the music gets overlooked at all? Or maybe you don’t bother reading any of what the press says? I just think a lot of the stuff about our hair and what we’re wearing, I just think it’s so funny because what people don’t realize is that how you get Haim’s hair is don’t wash your hair for five days. Us playing a show is the most important part of my day, but me putting on makeup or putting on a shirt, people don’t realize when you’re on tour that you don’t change your clothes ‘cause you’re wearing the same clothes all the time. People are like “What are they wearing?” and I’m like “I’m wearing a vintage Snoop Dog shirt that I’ve been wearing for the past five days. It smells really bad. I’m sorry and don’t hug me ‘cause I probably smell." Touring is a rough thing so I just find that stuff so funny. Not to say that I’m a dirty person, ‘cause I’m definitely not a dirty person, and I promise you I do shower, but the music is the most important thing for me.

The only thing I get hung up on is when people are fascinated that we’re a girl band, and just the name girl band is so weird to me. Talk to any girls in music and I think a lot of girls get really put off by “girl band” or “girl singer”. It’s like a fascination that we’re women, as if women have not been in music ever. Women have been in music forever, like there has not been a period of music that women were not a part of. But it’s kind of weird that in 2014 you have people who say “Hi, we’re this new girl band”. If any other band came out that wasn’t a girl band, you wouldn’t hear “Oh hi, we’re this new boy band.” You wouldn’t call the Killers or Foster the People boy bands. We call them the band.

I’ve sometime wondered if this album were released by an all-male band, what would have happened? Would there be more attention paid to the music and less on the hair? Yeah, that’s the only thing. But honestly, other than that, we’re all in it together. All the girls I’ve met on tour that are in bands, we all stick together and stick up for each other. And there’s incredible music coming out by women right now. Like Warpaint is such a fucking rad band, they’re so good. Stella their drummer is probably one of the best drummers I’ve ever seen in my life. She’s so amazing. And I got to go on tour with them in Australia, and they’re just so dope, but I would just never consider them a girl band. They make really amazing music and they play live. It’s just cool, they’re just cool girls. So, I don’t know. Sometimes it just blows my mind. I’ve said it before that it almost sounds like archaic or something, a girl band. There are bands, like the Spice Girls were a girl band, that’s just what they were. N’Sync was a boy band. I feel like us and Warpaint and, who else, Bleached is a fucking dope band also, like really rock girls that are playing their own instruments. We’re just bands, just call us a band. It’s so easy.

I totally agree. So, Gothamist is a NYC site and you mentioned playing NYC many times. Do you have any anecdotes about the city or any stories you can share, maybe something about SNL? I think we’ve just had really amazing times in New York. I’ve never been to New York and not loved it. It’s such an energetic city. I mean yeah, I still can’t believe we played SNL. It kind of feels like a dream. Like when people say “You played SNL,” you have to look back and say “I actually did play SNL”. [Laughs] Like “Did I? Do you have video of it? I don’t remember!” It was just such a rad experience. I mean it’s just such an amazing city and it’s so nice to go to a city that’s not your hometown and feel like it is. And I can’t believe we’re playing two Terminal 5 shows. I couldn’t even imagine we’d sell out one Terminal 5 show and to sell out two Terminal 5 shows is like, I don’t even know what’s going on right now. I was crying for like four days after I heard about Terminal 5, and I was like “Oh my god, I don’t know what is going on. I can’t. I can’t listen.” [Laughs].

Well, I’m sure it’s only going to get bigger and crazier. I’m going to be at both shows, so I’m really looking forward to it. Oh, rad, awesome. And I promise I’m not a smelly person. [Laughs]

Well, Terminal 5 has three levels. [Laughs] Exactly what I was saying like 10 minutes ago! I swear I’m not a smelly person. I shower!

#alana haim
#alex tween
#haim
#interview
#original
Do you know the scoop? Comment below or Send us a Tip