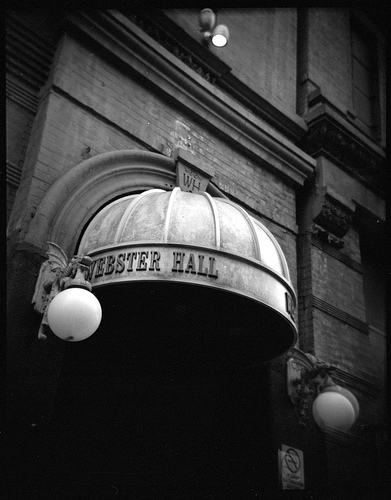 These days people tend to complain about Webster Hall more than they praise it. The drinks are expensive (even a water will set you back 4 bucks), the shows are too early and the nightclubs below the venue's main room are hopping with the B&T crowd. On the other hand, the stage has hosted some great bands, and the lighting always looks nice...so it may just be time to pay some respect to the place as it gets one step closer to being Landmarked.

Built in 1886 by architect Charles Rentz, Webster Hall became one of the country’s first modern nightclubs. Located on 11th Street between 3rd and 4th Avenues, its website boasts “It was where the original bohemians, like Emma Goldman, Marcel DuChamp and Margaret Sangor, created unique costume balls to benefit nascent social and political causes.” Rumored to be owned by Al Capone, the law averted its eyes to many of the illegal undertakings occurring inside...especially during Prohibition when it operated as a speakeasy.

It wasn't until the 1950s that the venue began regularly hosting musical acts -- something that continued even when it was known as The Ritz in the 1980s. After that six year stint, the four Ballinger brothers (Canadian club owners with deep pockets) completely restored the building (down to the original color schemes), along with the Webster Hall name. Today, Landmarks Commissioner Robert Tierney is calling the Hall a "major architectural treasure." So perhaps even our children's children will be able to one day enjoy Ladies Night, as The Landmarks Preservation Commission will be holding a public hearing determining if it should gain Landmark status on October 30th. Check out this panorama to get a good look at the place...we think those walls tell enough New York stories to deserve Landmark status.