Alex Xander, your favorite Bensonhurst partyexperience king, is back in action this month, though this time he won't be getting arrested on the Manhattan Bridge (maybe). No, this time Xander's spreading the holiday cheer with his new "Xander Gives Back" program, promising to donate all the profits from his upcoming Xandernation: Xander Clause soiree to a charity chosen by the community.

After the widespread success of last summer's 600-person "event" on the Manhattan Bridge, the 19-year-old Xander (real name: Alex Shlaferman) decided it was time to give back to the city that put him on top, so to speak. "This is just my kind of good deed back to New York," Xander told us. "New York gave me a really big present in the summer by giving me all this publicity and kind of propelling everything that we're doing, so this is kind of my present back to New York City, to be able to do something like this." 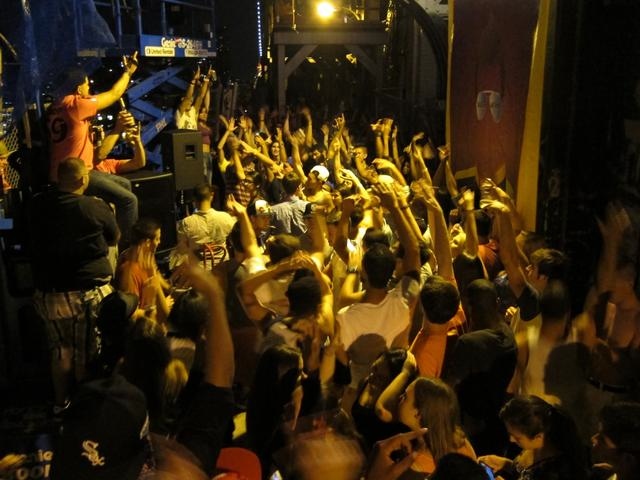 The good deed is as follows: Xander's throwing an "intimate" (re: 750-capacity) event at an undisclosed "rich Brooklyn neighborhood" location on December 29th, with tickets running $20-$100. When the final boughs of holly are wiped away, Xander will post all the proceeds from the event in a "total open transparency format," and people will have the opportunity to vote on charities and other causes they'd like the money to go towards.

Xander says that despite his "big party guy" persona, holidays are a time for loved ones. "I really value spending time with my family and friends more than anything else," he told us. But post-family time, he's all about this city and the people in it. "It's been a really good year so that's why I feel like this Xander Gives Back thing is a really perfect way for me to end the year," he said. "These people all approach me and they're like, you know, 'What are you going to do?' And all these guys care about is money. Like, what are the dollars, how many people are coming, blah bah blah. And i'm like everything is fine, we'll take care of all that. But remember, there has to be always a portion that's going to go back to NYC, that's going to go straight back to the local community."

You can still purchase Xander Clause tickets online, and though this purports to be a smaller affair than some of Xandernation's previous exploits, don't feel too bad if it sells out before you snag one; Xander says major concert promoters have approached him about launching something more large scale in the future. "A lot of really big concert companies have reached out to us to use Xandernation as a brand...to do something of an Electric Zoo type nature," he said. Have your neon jumpsuits at the ready, kids.