Yesterday we noted the existence of the website Styleblaster, which posts real-time photos of people walking on Williamsburg's Bedford Avenue and lets the Internet vote on how "stylin" the subjects appear to be. Today we interviewed one of the website's mysterious creators, Jules Laplace, to find out more about this project, which strikes some people as a tad creepy, and others as just another example of Williamsburg being Williamsburg.

Where did this idea originate? My roommates and I live in such a great location, so doing a site-specific documentary project suggested itself. My girlfriend Mary had the idea of a live, automated streetstyle blog a while ago, and putting it in on the trendiest block in Williamsburg was a natural fit.

What's your favorite photo/look so far? Today it's raining, so the umbrella thing is really trending. Raincoats, windbreakers, peacoats are big today. Of course, we are looking forward to Halloween! 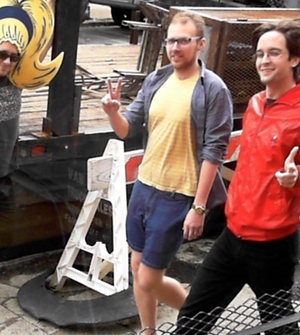 The camera is motion-sensitive. My roommate Jack built the Processing sketch that follows the image and detects when someone walks past. It's pretty cool—we only get people walking left to right. He's written a blog post about the technique here.

What are the hours of operation? Working hours are 9 to 5, or thereabouts. Done by dusk.

Are people as stylish as you expected, or less so? We went into this knowing Williamsburg has some of the best streetstyle in NYC, and the people haven't let us down. Everyone has their own flair, it's really inspiring to see.

Can you please give us some fashion tips for readers who may be passing through Williamsburg? We're big fans of New Aesthetic fashion over here—all-over prints, pixel-perfect haircuts, and satellite recon gingham. For hipsters—Croakies are back in style, and this year's Loew's fall fashion line is to die for. And for the rest of us who can't afford Opening Ceremony—put your cellphone away, be poised, and stride confidently. You never know who you're going to meet/tweet!

Is the camera mounted at your house? Has anyone complained? Yes, it looks out our front window. We haven't received any complaints, people are really positive about it! People love to judge fashion, and everyone has an opinion on hipsters. We're proud to make the first streetstyle blog that doesn't discriminate and recognizes that everyone has style.

What's your background/occupation? I'm a programmer with OKFocus, a web design firm in Long Island City. Jack is a new media artist and interaction designer-developer. On the concept side, Mary is a data scientist, and Winslow is a producer and all-around creative genius.

#bedford avenue
#fashion police
#styleblaster
#williamsburg
#original
Do you know the scoop? Comment below or Send us a Tip