Memorial Day Weekend is... this weekend? Yes, we've quadruple-checked our calendar and called the Pentagon to confirm that next Monday is indeed already Memorial Day. Weird! It sneaked right up on us this year, but despite the suddenness of it all, the Parks Department says local beaches will be reopening this weekend, Sandy be damned. The sea will probably be cold, many boardwalks still need a lot of work, and you may have to use a portable toilet (in addition to the ocean, heh), but it's really happening. (18 of these spage-age temporary bathrooms have also been installed, with more to come.) Here are our favorite local beaches, with the notable exception of Fort Tilden, which will not reopen this summer due to Hurricane Sandy. 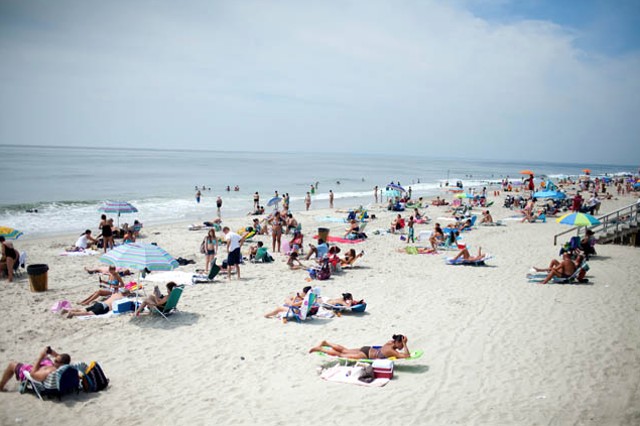 Rockaway Beach: The Rockaway Peninsula was clobbered by Hurricane Sandy, and more than six months later, rebuilding continues. Part of the boardwalk will be open for business starting this weekend, but a two mile stretch is still a ghost of its former self, with nothing but concrete pylons rising from the sand like giant tombstones. Still, the beach endures, and Rockaway Taco is open, as well as other vendors that could sure use the business.

Getting there should be interesting. The MTA is still working to get A train service operational across Broad Channel, where storm surges washed out the track. Service is expected to resume May 30th, or whenever the MTA completes a $15.7 million sea wall intended to protect the tracks through Jamaica Bay. For now, shuttle buses connect the Howard Beach A stop to the Beach 90th Street stop, where you can get out and walk a couple of blocks to the beach. (During weekdays, you currently have the option of a Rockaway ferry.) 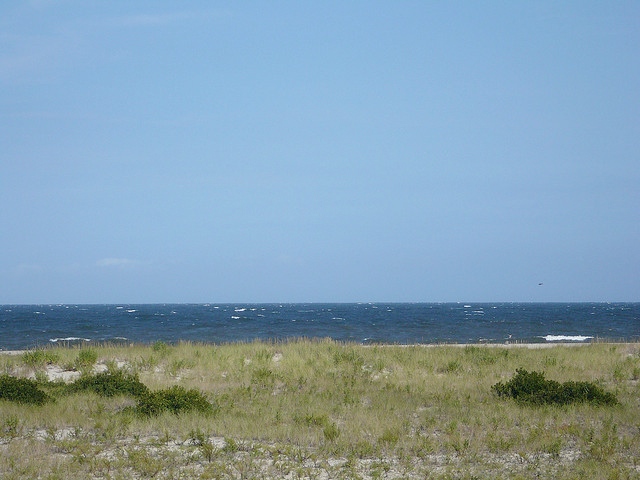 Sandy Hook: This is still our favorite local beach destination, but it's also the most expensive to get to. Call it the cost of convenience: Instead of lugging all your beach paraphernalia up and down stairs through multiple subway and LIRR transfers, you just need to get to Pier 11 or East 35th Street and let the Seastreak Ferry do the rest. $45 gets you a round trip ferry ride to New Jersey's pristine Sandy Hook, where both family-oriented and nude beaches await. (Gunnison Beach is clothing optional, FYI.) The voyage, which is beautiful, gets you there in about a half hour.

At Sandy Hook, a free bus awaits to drive you to the beaches, or you can bring your bike (for an extra $5) and pedal over to the beach on the bike trails. Hurricane Sandy caused damage to parts of the bike paths, but a spokesperson tells us the paths are open, you'll just need to walk your bike at certain points. It's about a five minute bike ride to the nearest beach, and a little further to the nude beach (Gunnison). Each of the main beaches have lifeguards, bathrooms, showers, changing rooms, umbrella rentals, and snack food stands.

The hurricane also damaged the park's sewage treatment plant. It's now back in service at some of the beaches on the northern end of Sandy Hook, but portable toilets are in effect at half of the southern beach centers. 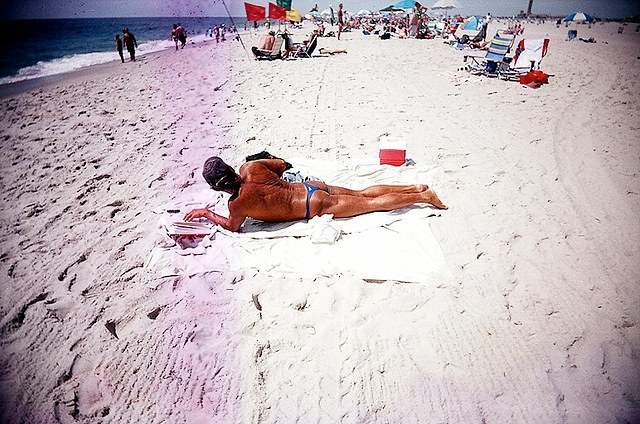 Jones Beach: It can get crowded and it's a bit of a schlep, but Jones Beach State Park is definitely the place to go for a big, classic day at the beach. It boasts 6.5 miles of ocean beach, a beautiful boardwalk, a half mile of bay beach, two swimming pools, miniature golf, and a Friendly's. Of course, let's not forget the visually stunning yet maddeningly fascist amphitheater, where we once saw a Phish fan jump from the balcony during set break.

Hurricane Sandy shredded the boardwalk, but it's been replaced, and the Robert Moses-era bathhouses survived intact. The park reopens for swimming this weekend, but according to the Times there will be no concessions operating yet. The Governor's office also says that areas between the West Bathhouse and the East Bathhouse are closed mostly due to boardwalk damage and reconstruction.

Depending on where you're coming from in the city, it can take between 90 minutes to two hours by mass transit. You take the LIRR to the Freeport Stop, where you'll squeeze onto an MTA bus packed with rowdy teenagers who will spark a wave of dread and doubt about your decision to ever leave the A.C. Maintain. As everyone gets off at the West Bath House, remain calm and seated. Go further, to the East Bath House, where the beach tends to be less crowded. While it's true the Friendly's is located at the West Bath House, it's advisable to hit that at the end of the day, after a leisurely stroll along the boardwalk. 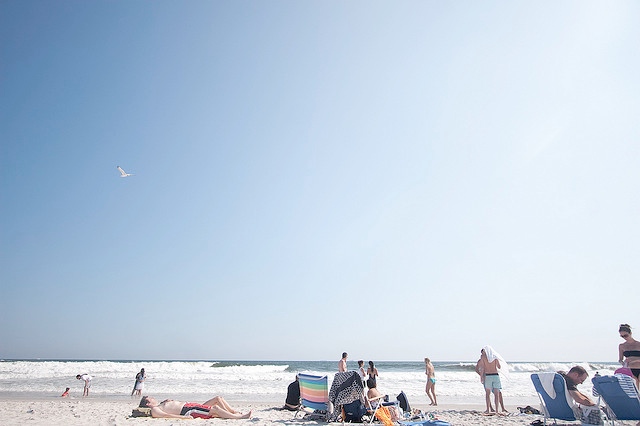 Long Beach: The closest Long Island beach to NYC's border is Long Beach, a popular destination for urban day-trippers and locals. While it's not quite as scenic as Jones Beach, due to tall residential buildings encroaching on the sand, it is easier to get to from the city, as there's no bus transfer required after getting off LIRR. On the other hand, there is a fee— a day pass for the beach costs $12. But the community, which is still recovering from Sandy, could certainly use the revenue—the two mile boardwalk was obliterated during the hurricane and hasn't yet been rebuilt.

The LIRR sells a combined round trip rail and beach permit for $21. Take the train from Penn Station or Atlantic Terminal to Long Beach Station; the beach is a short walk from the train. For more details on where to enter the beach, here's the Long Beach website. 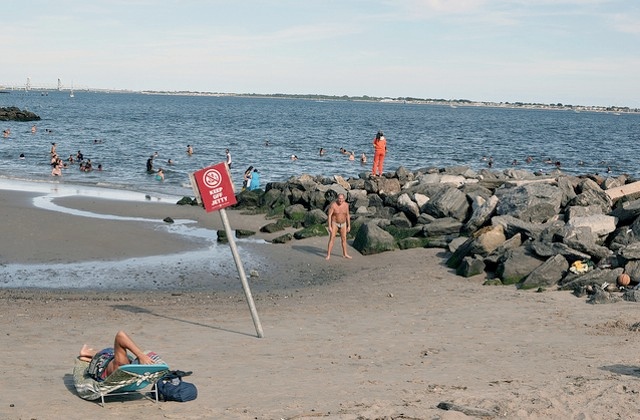 Manhattan Beach Park: This Brooklyn beach, which sustained significant erosion from the hurricane, is slated to reopen Memorial Day weekend. Beloved by locals from the Manhattan Beach neighborhood, the park is a cleaner, less-crowded alternative to the Coney Island and Brighton Beaches.

It’s about a 40 minute subway ride from Union Square, plus an additional 10 minute bus ride or 20 minute walk from the B/Q stop at Sheepshead Bay. That walk takes you over the quaint Sheepshead Bay on an equally quaint wooden footbridge, and then through the quiet and majestically ritzy Manhattan Beach residential area. Surrounding the beach is a large space for grilling and a variety of playgrounds, making Manhattan Beach the perfect spot for an all-day, blood-pressure-lowering adventure. (Briana Parker)

#beach
#beaches
#best of gothamist
#memorial day
#ocean
#summer
#original
Do you know the scoop? Comment below or Send us a Tip