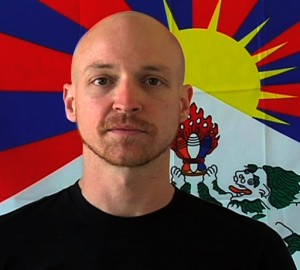 Reports are coming in that NYC street artist and Graffiti Research Lab founder, James Powderly, has been detained in Beijing for planning a pro-Tibet protest via a L.A.S.E.R. Stencil art piece. When Boing Boing reported the news at nearly 8 this morning, he had been held for around 19 hours already. They were tipped off by Students for a Free Tibet, who learned of it via a Twitter message that read "held since 3am." There's no further word about the status of this situation, and Beijing officials have yet to acknowledge he's being held.

There is plenty of information on what led to the art project Powderly has allegedly been detained for, however. Boing Boing points to a statement that reads, in part: "James is proud to have been kicked out of the Synthetic Times new media art exhibition in Beijing because he wouldn’t censor his little art project. It was after being kicked to the curb by the show’s curator that James connected with Students for a Free Tibet and decided he would go to China anyway and do what he though was right in support of Tibet, Taiwan, free speech and the people of China."

According to his colleague, Nathan Dorjee, the plan was to "project a message that said, `Free Tibet,' and some other messages that would have been three-stories high in different locations in Beijing." The Students for a Free Tibet have more on the backstory, and say "his current whereabouts remain unknown."

#art
#beijing
#detained
#Free Tibet
#Graffitti Research Lab
#GRL
#James Powderly
#protest
Do you know the scoop? Comment below or Send us a Tip
A new Gothamist is coming! We’ve moved comments over to our beta site. Click here to join the conversation and get a preview of our new website.