I have one chair in my apartment. It's at my desk and it doubles as a place to hang a few bulky sweaters—some of which I grab frequently, others buried under those that I will likely never wear but have trouble parting with. One features the colors of the '70s and looks like a camping blanket. Anyway, this chair serves two purposes—sitting, and holding my sweaters—and it's about all that my 212-square-foot apartment can accommodate. You might have more chairs, and I think that's fine. Maybe you have two, set up to create an intimate conversation area. Maybe you have four, around a kitchen table. Maybe you have one in your bedroom, and one in your living room. I get it. But how many chairs is too many chairs? For the answer, we look to Greta Garbo: 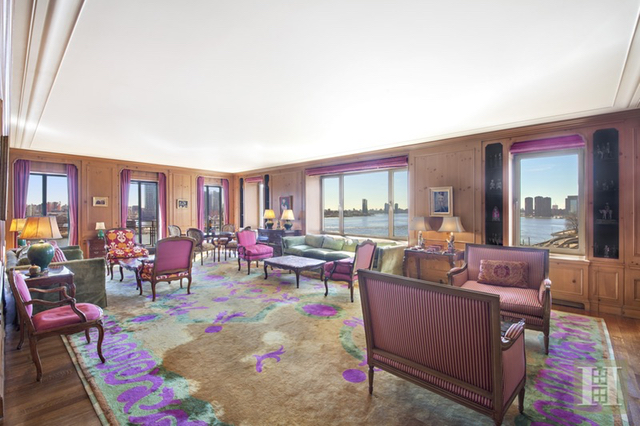 The late screen legend's old apartment features somewhere between 25* and 190 chairs in one room, something I have been thinking about ever since I saw the photos from the apartment listing last week.

Garbo's old home is in the very fancy east side co-op The Campanile, where she purchased the apartment in 1953, living there until her death in 1990, according to Curbed. Garbo's family has now put the apartment on the market for $5.95 million (cash only!), and according to the NY Times little has changed since Garbo lived there, particularly the design details, like those chairs. "She decorated her home in a way that was very comfortable,” her great-nephew Derek Reisfield told the paper.

The living room looks like an eccentric chair museum, and was her most treasured room, according to the Times—"On the south side was Ms. Garbo’s favorite room and the heart of the home: the 34-by-20-foot living room, which leads to a library." The room features "a gas fireplace with a green marble surround, a small balcony and several windows, each with mirrored side panels to enhance the water views." It also appears to feature 275 chairs* in approximately 37 different seating zones. They are not included with the apartment, but we do recommend bringing your own chairs in to keep the art of conversation alive. Anything less than 17 seating zones will be considered an insult to Garbo, to communication, to taking a load off, to the ancient Egyptians, to cocktail parties, to parlour games, and to the wonderfully simple idea of lounging.

*The number of chairs has been greatly exaggerated to fit the author's tone.