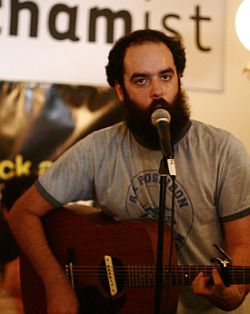 Born out of the art school insularity of SUNY Purchase back in 2003, the New York-based quintet O'Death (MySpace) has cultivated an increasingly rabid fan base for their punk-inflected Appalachian caterwauling. Stray too close to the stage at one of their shows and you're liable to find yourself completely enveloped by a sweat-drenched crowd of dudes determined to make banjo moshing a reality in our lifetimes. It's a blast.

Their newest album, released yesterday, is Broken Hymns, Limbs and Skin, which the Village Voice calls "cresting and joyous." We spoke with frontman Greg Jamie about his band, his wedding, and his underwhelming neighborhood of Kips Bay. O'Death plays the Music Hall of Williamsburg tomorrow night.

It seems like a lifetime ago since I first saw you guys at the Spiegeltent, but it's only been about two years. I'm wondering how much your lives have changed since then? Well, I think that was kind of a pivotal show for us in a lot of ways; I think that for some reason there was a lot of press at that show or there was something kind of building around that show, and then the next month CMJ and stuff... I mean, the biggest difference is that since then I think we take it pretty seriously, and we don't really do a whole lot else with our lives. In the last year we've played at least 150 shows, so there's not as much time for anything else. I'm set to get married next month, or two months actually. So yeah, two years can mean a lot in your early twenties, I think. It's more of a serious musical project than ever before.

Has everyone in the band been able to quit their day jobs? No, I wouldn't say that exactly. Everyone does what they can to make money when they're in town. But you can't have anything regular or steady because we've been on the road so much and it's going to be that way probably at least through like February. So it's kind of a balancing act, trying to figure out how to get by when you're in town.

How do you feel about the new album? It's an album that we're all pretty proud of. It's kind of exciting to us; it's got a lot of energy, a lot of of aggression and it's a collection of songs that we're all really excited about. It's the first time we've worked with a producer to kind of cultivate a certain sound, and it's more mature in some ways. But it's a lot of fun. I'm not really sure what to say; I haven't listened to it in a little while, but I like it.

Do you guys have a tour bus now? We have a van we got about a year ago and there's twelve passengers. It's not too big. We may need to upgrade and get something more serious if we ever want to bring out a tour manager or a sound guy or anything like that. There isn't really any room for much else.

Have you been approached to use your music for licensing for advertising or anything like that? It's been pretty limited, the kind of approaches that... We haven't had a lot of offers in the publishing realm.

Is that something you're open to? Yeah, you know, depending on what it's for. It seems like last year there was stuff like neo-Westerns coming out that I feel like our music would have fit with, but I don't know.

Are people in the audience recording your shows? Not that I'm aware of. I mean, sometimes you see things on YouTube that you didn't know was happening, but I don't really think there's much of that going on.

Do you follow along with the music blogs? More than I should. I'm not much of a technology person but I'm definitely interested in that kind of stuff, just to see how people are responding. It's one of those things that you're not really supposed to get too wrapped up in, and sometimes I do. But I think I'm in the minority on that as far as the band goes.

What neighborhood do you live in? Right now I'm living on 29th and 3rd, which is sort of Kips Bay.

How do you like it there? You know, like everything in Manhattan it's becoming very... buildings are being knocked down and tall buildings are being put up and it's become like a bar. But not in a fun Lower East Side way; more like a sports bar, you know. A weekend destination for New Jersey. It's not an amazing neighborhood, actually.

What are your favorite places in the city to play? Bowery Ballroom has been good to us, Mercury Lounge has been nice. There's not a lot of truly independent clubs anymore. I used to like Northsix the couple times that we played there. And we played at Tonic once, but that was a pretty gritty club. I don't really know what the big clubs are in New York. I like to go to Cake Shop to see some shows but we haven't played there in a while.

Do you plan on staying in Kips Bay or are you going to move somewhere else? I'd like to get out of the city possibly in the next couple of years; it's a little bit more hectic than I think I'd like. I tend to spend too much time at my parent's place these days, just to get out of the city and stuff. They live on Long Island. And I would live somewhere upstate or something like that possibly but I'm about to get married in October.