"I don't think I'm well-equipped to deal with death yet," Olivia Li, a 25-year-old comic artist from Boston, mused aloud on a recent evening at Brooklyn's Green-Wood Cemetery. Li isn't currently dealing with death, or planning to anytime soon, but her interest in the topic drew her to the second of the cemetery's monthly Death Cafe series—a place for people to discuss our inevitable fate.

The concept of the Death Cafe, which provides a space for wide-ranging conversations about death, was popularized in the early years of this decade by British web designer Jon Underwood, who drew inspiration from the "café mortels" of the Swiss sociologist Bernard Crettaz. Since Underwood held his first salon-like gathering in his London basement, his website claims there have been more than 4,000 formal Death Cafes in 42 countries around the world.

The Cafes, which do not provide psychotherapy or grief-counseling, all abide by a few universal principles: meetings must be not-for-profit, respectful, confidential, and have "no intention of leading people to any conclusion." Refreshments must be served. Cake, Underwood has written, "normalizes things."

"Underwood's notion was that death was a final and last frontier in terms of a conversation topic," Death Cafe facilitator Amy Cunningham, who runs a private funeral business, told Gothamist. “Folks were really more comfortable talking about their sex lives than they were about their thoughts and fears of death."

After a brief introduction in the crematory's chapel, the attendees, who ranged in age from their mid-20s through mid-60s, split up into groups of four and scattered themselves throughout the modern building's urn-lined rooms.

Conversation topics ranged from the philosophical to the practical. One person discussed a friend's suicide, someone else offered her ideas on how best to die, others talked about their feelings surrounding their own death.

"I've struggled with depression and had the passing thought, 'How am I going to spend the next 60 years? How am I going to kill all this time?'" said Stefanie Barrister, a recent New York transplant. "But I have this lovely, wonderful partner and I feel very different now. Even if my partner was to walk away or disappear, I think the experience of being with this person has inspired me to blast off."

Beth Ogando, who described herself as "death-obsessed," talked about her relationship with her late father, whose ashes she keeps in a marble urn in her home.

"I wasn't speaking with my father at the time of his death and he died a really bizarre, unexpected death," Ogando said. "It's actually a great relationship that's been resumed post-mortem with him. We talk about him like he's there, because he is there, he's in the room with us all the time."

Li came to the Cafe with her friend Ashley Murphy, who stumbled upon the event while Googling Starbucks cafe locations. They were both intrigued by the idea. Li is also currently writing a ghost story. 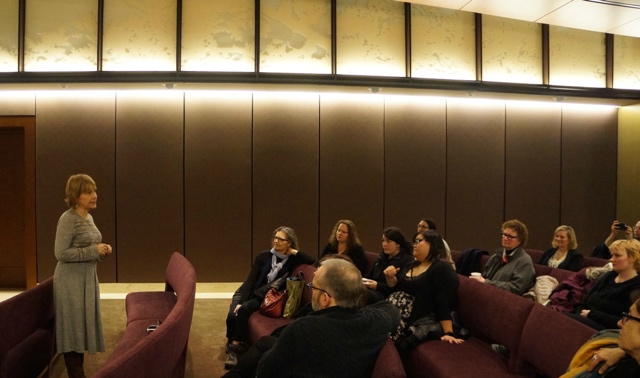 "I haven't had much experience with death, but I feel it coming, I'm getting a little paranoid about it," Li said. "Talking about death calms me down, at least on an abstract scale," she told Gothamist after the event.

Conversation also drifted to the 180-year-old, 478-acre cemetery in which the Cafe had convened. Almost all the attendees had visited Green-Wood before—some are avid fans.

"I'm here all the time," said Jeff Heilman, a writer originally from England. "My wife and I come here just as a matter of course, once a weekend, and get lost and learn a new piece each time." Another regular, Jackie Colgan, who comes from a family of cemetery keepers, said her mother and grandfather used to picnic by Green-Wood's lake.

These regulars are part of a long tradition of sightseers at Green-Wood. In the 1860s, Green-Wood was the nation's second most popular tourist destination after Niagara Falls. Each year, half a million visitors would travel by carriage to Brooklyn and spend the day strolling along the winding, hilly paths or picnicking on their family plots. Green-Wood—now surrounded by the dense residential neighborhoods of Park Slope to the north and Sunset Park to the south—was, and remains, a place to grieve, but also to escape the frenetic pace of the city.

"No one seems rushed here," attendee Michelle Talich said. "There seems to be a respect and people pause and move at a reasonable pace."

Like Underwood, Cunningham believes there is a widespread unmet desire to talk about death, particularly in large cities like New York, where life can feel anonymous and many are unconnected to religious or civic institutions.

"We don't know funeral directors," Cunningham told Gothamist. "We're roaming free and people are less sure about what's possible and what to do at the end of life."

After a career as a magazine writer, it was Cunningham's father's death in 2009 that inspired her to enroll in mortuary school. Seven years later, now 61, she owns and manages Fitting Tribute Funeral Services, which specializes in green burials, home funerals, and cremations at Green-Wood. While she says she brings no philosophical agenda to the Death Cafes, she hopes the discussions will help destigmatize death and dying.

"We read so much in people's obituaries, 'lost his battle with cancer,'" Cunningham said. "But some of us feel that...it's not a failure on the part of the dead person, that you can, perhaps, conceive of death and visualize it for yourself as something that you can do successfully and die whole, as a person who's healed and settled."

#brooklyn
#cemetery
#death
#discussion
#dying
#original
Do you know the scoop? Comment below or Send us a Tip