On Sunday, August 24th, Green-Wood Cemetery will unveil an old map from the Battle of Brooklyn, which will also be observed that day at their annual commemoration. The map, which is a one-of-a-kind Revolutionary War map used in battle, will go on to be exhibited at the Brooklyn Historical Society through February 2015.

The Green-Wood Cemetery is on the same ground that a large portion of the battle was fought back in 1776, and every year the cemetery hosts re-enactors donning full Revolutionary War garb. The battle was the first of the American Revolution fought after the signing of the Declaration of Independence. But back to the map... 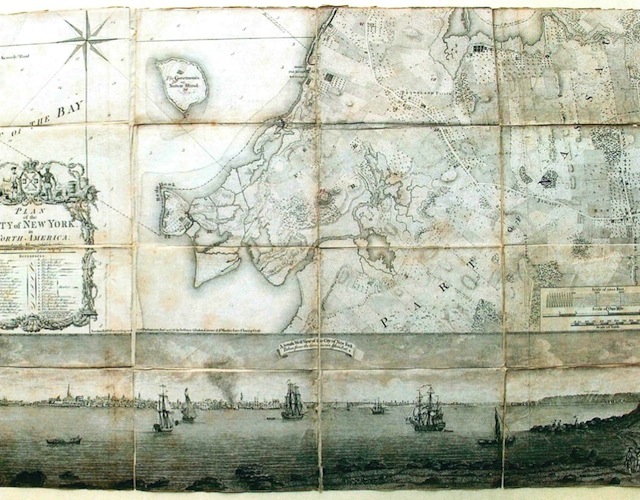 "General Percy’s beautifully illustrated map, dated 1776, was created by notable British engineer and cartographer Bernard Ratzer. Depicting parts of Brooklyn, it is marked in General Percy’s own hand with red numbers and dots denoting troop positions of the Continental Army under the command of General George Washington—making it unique among Revolutionary War maps.

Historian and author Barnet Schecter said, 'It’s been said that the Declaration of Independence was signed in ink in Philadelphia, but signed in blood at the Battle of Brooklyn. Percy’s map is a unique artifact of that battle, bearing markings in blood-red ink showing the American positions that the British intended to overrun in their drive to capture Brooklyn Heights. After their initial victory in the battle, the British failed to storm the American lines, enabling George Washington to evacuate his troops across the East River. In Brooklyn, the British lost their best chance to win the war with a single decisive battle.'"

The map was purchased last year by BHS and Green-Wood, funded by a grant from the B.H. Breslauer Foundation. It will be shown alongside another rare Ratzer map from 1767—"Research shows that the map was given to BHS in the 19th century by founding member, Henry Evelyn Pierrepont, who was also the visionary behind the creation of Green-Wood Cemetery."