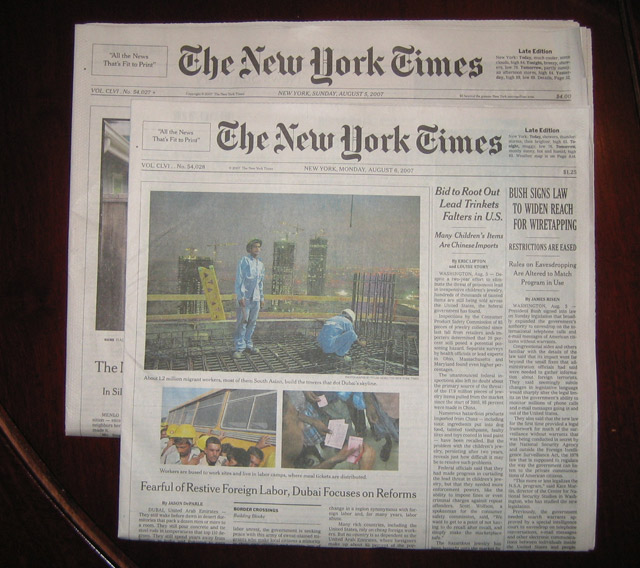 Today, the New York Times finally made its move to a 12 inch-width format with today's paper. The paper will stay the same price ($1.25 on weekdays and Saturday, $4.00 on Sunday) and will charge the same amount to advertisers, but can/may add more pages. Headlines and columns are narrowed, but the body copy type is the same (the spacing between letters, though, is more closed up). Interestingly, the crossword itself looks generally the same size, though the clues columns are narrower.

Originally, the NY Times was going to change its size next year, but spokeswoman Diane McNulty explained that the Times was able to get its press configured sooner. The Times expects to save $7-10 million a year with the change.

Other newspapers in the 12-inch width format: The Wall Street Journal, Washington Post, and Los Angeles Times. Recently, the Observer went to a tabloid format, which makes us think the NY Sun might be the only NYC daily that publishes in the 13" six-column broadsheet format. The Sun's ad rates specify a 13-inch width format, but our wooden ruler says the paper is just 12.5 inches wide, or just a half-inch broader than most major dailies.