A few hundred people gathered across the street from the Times Square New Year's Eve ball to make sure that this year's batch of celebration confetti can withstand being thrown into the air.

Those waiting to experience New Year's Eve two days early were a mix of tourists and New Yorkers. Cassandra Curbelo came from the Bronx, telling us, "As a native of New Yorker, we know about the craziness that happens in Times Square. So when we found out that there was a way for us to enjoy the confetti and the spectacle without the crazy long day of being out here for New Year's Eve, we thought it was a great idea."

Jessica Long, her teenage daughter, and mother were visiting from North Carolina, but are leaving tomorrow. "This is going to be our New Year's Eve celebration," Long explained. "This will be our experience for what we'll miss" on December 31. When asked why they were in Times Square at all, she said, "It's the heart of the world! I mean, look at it!"

"We're making sure it's perfect for Times Square New Year's Eve," Jeffrey Straus, president of Countdown Entertainment, told the crowd, while holding a handful of confetti. He and others from the Times Square Alliance and sponsor Planet Fitness stood the marquee of the Hard Rock Cafe with Strauss, who then led several tests with countdowns—"Five... four... three... two... one!"— and shouts of "Happy New Year!"

Straus, who at point used the word "confettability" to describe the quality of the paper, deemed the confetti "perfect" after a second toss. About 1.5 tons of confetti will be thrown from office buildings around Times Square at midnight.

"It was amazing!" Elizabeth Meyer, from Branchburg, NJ, exclaimed. She was in New York to celebrate her young daughter Charlie's birthday. Clutching some confetti that she collected from the ground, Charlie said, "I'm going to take it home and put it in my room." 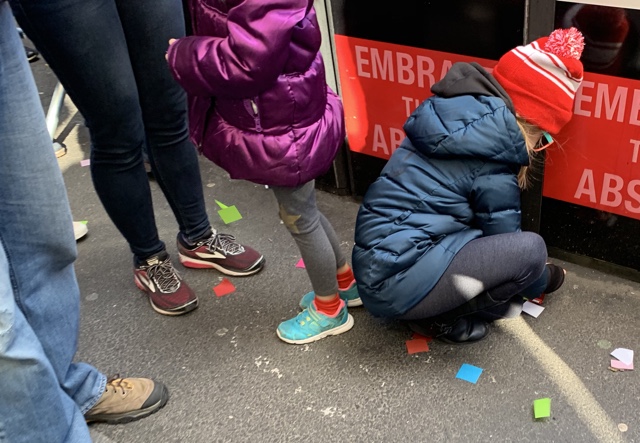 "And maybe throw it on New Year's Eve at our house," her mother added.