Grave Spotting: The 15-Year-Old Who Was Killed While Dodging Kisses In The Met Life Building

Have you ever walked around the cemeteries of New York reading the old tombstone inscriptions? Well, if that's not your thing, we're here to point you in the direction of George Spencer Millet's grave in Woodlawn Cemetery, which tells a tragic and unusual story. His headstone reads: "Lost life by stab in falling on ink eraser, evading six young women trying to give him birthday kisses in office of Metropolitan Life Building." This happened the day after Valentine's day, on February 15th, 1909—which also happened to be his 15th birthday. And to clarify, an ink eraser is not an eraser, it's more like a knife.

According to a NY Times article (PDF) printed on February 16th of that year, Millet was working as an office boy for the life insurance company. They recount how the incident played out, saying he was "stabbed in the left side, apparently as the result of skylarking in the office, and died in an ambulance on the way to the New York Hospital." 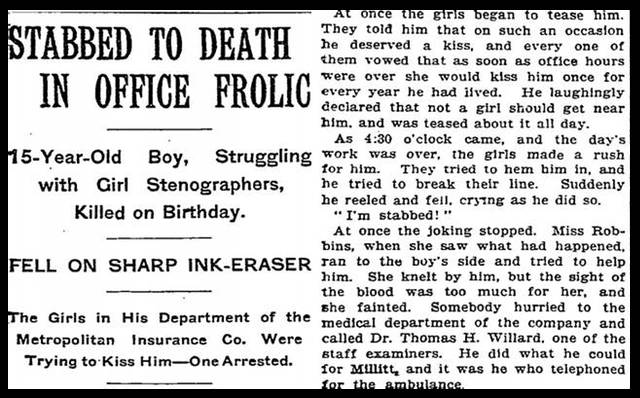 Millet was unable to tell authorities how he got his wound, and later a stenographer at the office was arrested and charged with homicide. There was little evidence, however, and she was eventually just kept as a material witness. The article suggests the whole incident was shrouded in secrecy, with the first policeman noting the evasiveness of those in the office, where at the time Millet was still dying on the floor. However, the general consensus seems to be that this was nothing more than a tragic accident.

Here is some more from the New York Evening Telegram: 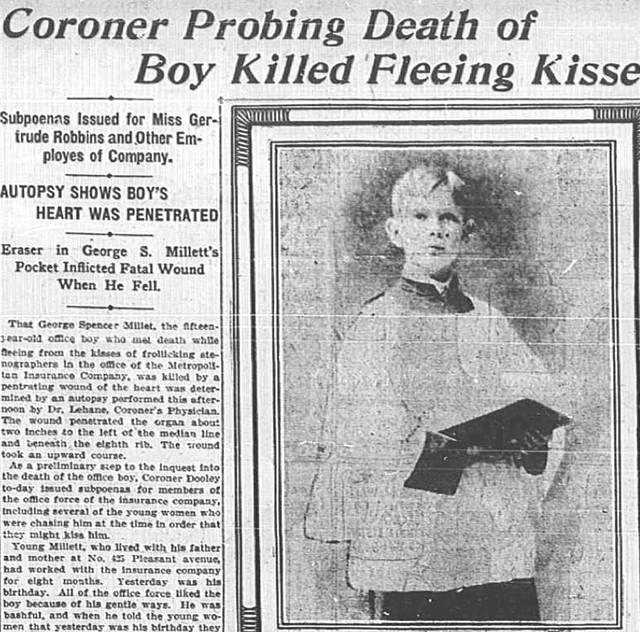