Graphic Photos From This Weekend's Shark Fishing Tournament In Montauk In the wake of the arguments about the death of Montauk, arguably the last authentic vacation spot on Long Island’s East End, writer Kelsey Osgood decided to visit the 26th Annual Star Island Yacht Club Shark Fishing Tournament, an event that is a favorite of real live locals and lovers of the “old” Montauk. Below is her dispatch, and some (sometimes graphic!) photos from the event, which took place over the weekend. 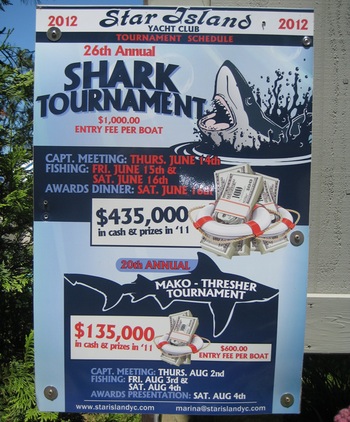 My companions and I arrive on Saturday around 11 a.m., just as a 6.5 foot, 171-lb Mako shark is being dragged off a boat and hoisted up by a rope to be weighed. The sparse crowd (it will swell by mid-afternoon) gathers around to watch the shark’s internal organs be removed and tossed into corresponding buckets so representatives from the National Marine Fisheries can study them later. As it’s early and there aren’t many people, Kevin Gershowitz, who has been running the tournament from its inception with his twin brother, Elliot, carries around a still-beating shark heart for the spectators to ogle. (My friend, a med student, gleefully grabs the heart and begins examining the ventricles, and we end up with flecks of shark blood on our feet for the remainder of the day.)

Kevin and Elliot provide us with some of the specifics of this year’s tournament: of the around 150 boats at the tournament this year, about 45% are first time competitors, though one boat on Friday, the first day of fishing, had competed every 26 years so far. The boats depart the marina around 6 a.m. and on Saturday, the second and last day of fishing, were required to be back within the jetty by 5 p.m. There’s a fairly elaborate gambling structure in place—each boat can win a certain amount of cash based on how much they put into the “Calcutta,” a separate amount from the $1,000 entrance fee, and are also eligible for the money put in by the club. All told, the prize money adds up to $540,000. The whole thing comes down to heaviest shark, of which there are three main kinds: mako, thresher, and blue. Hammerheads are kosher to catch, but the Gershowitzs haven’t seen one in 15 years. Looming next to where the sharks are weighed is a replica of the largest ever caught at Star Island, a 3,427-pound white shark hooked in 1986 by Captain Frank Mundis of the Cricket II. The catches of today look positively puny next to it—“You won’t see white sharks here anymore, as they’re endangered,” says a Gershowitz.

We pepper the heads of competition—friendly but wary, just like most denizens of small, seaside towns—for more information about the sharks. Blue sharks typically grow up to 12.5 feet long, makos 11.5, and threshers 11-12. Threshers are the slowest of the bunch, makos the best to eat, blue sharks very oily and gamey (the fact that they urinate through their skin affects the taste of the meat). Blue sharks are also the most common—a fisherman later tells me they’re so easy you can “play catch and release” with them—and therefore if a boat catches one and enters it into the contest, it has to be a minimum of 225 pounds to qualify, compared to makos’ 125 pounds and “other species” (including threshers) 150. Each registered boat is allowed to bring in one shark a day and no more. On Friday, 29 sharks were caught, the largest being a 422-pound thresher. After the sharks are gutted, they are either given back to the fishermen who caught it or donated to a soup kitchen in Riverhead.

Right after we arrive, there is a buzz of activity—the aforementioned mako, then a 198-pounder from boat 108—and then there is a lull. The process involves a lot of waiting around, but there’s enough going on at the Yacht Club to keep a lady occupied. They’ve got a pool, beer (tap and bottled is $6), and a full food menu. We order Land Shark Ale and fish tacos and shrimp and fries and listen to a lone guitar player strum “What a Day for a Daydream.” The sky is cliched blue, and local characters abound. Corey of Sullivan Landscaping tells us the ocean was rough in the morning and then begins lobbing logies into the water. A tiny old man with a Beach Bum Salons tan shuffles around taking pictures. A guy navigating a wheelbarrow full of shark guts through the crowd takes a break to remove his fat stogie from his mouth even though his hands are still coated in blood.

By 3:30 in the afternoon, the place is packed, and I’ve shoved my way toward the front and happily ended up next to John, a crewmember of the Barbarica, a boat that has been competiting for ten years and had already brought in a 317-pound Mako by 9:30 that morning. The Montrachet, a sleek white number with a 10-person crew made up of what appear to be J. Crew models, docks and prepares to load their fish. I eye the boat, nervous for John. “It’s huge,” I say. “The fish don’t know how big the boat is,” he replies nonchalantly. I ask John what makes a good fisherman. The knives? The bait? Dumb luck? It’s the latter, mostly. “Luck defines this sport,” he says, “but there is some skill involved. You have to be strong. Once these fish get over 300 pounds, they get possessed.”

John guesses at the weight of each fish that comes in, hoping they won’t top his morning catch. He scoffs at a blue. “Why would you even bother to kill that?” It’s all looking good for the Barbarica, but at 5 minutes to 5, the Little Mac out of Southhold, New York pulls in with a 344-pound mako. It’s a crew member’s birthday, and the captain’s wife and son cheer and snap pictures. I’ve lost John by this point, and I want to find him and give him my condolences, but when I manage to locate him, he shrugs it off. “We’re hanging out and having some beers if you want to join.” And indeed, I do.

#Montauk
#Shark Fishing Tournament
#sharks
Do you know the scoop? Comment below or Send us a Tip