Grand Central Terminal's famous ceiling isn't what it seems... okay, it is what it seems. It also, however, holds some secrets. A few fun facts, if you will. For example, [OCD trigger warning] did you know that there's one tiny section that has never been cleaned? 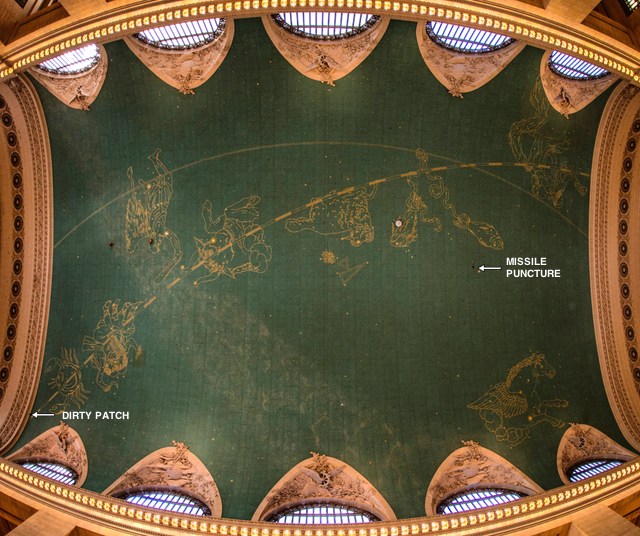 The ceiling was cleaned in the mid-1990s, and workers purposefully left this one portion unwashed. It's just past the end of the crab's claw on the northwest corner of the main concourse, and once you know it's there it might drive you mad! But it's really very cool: 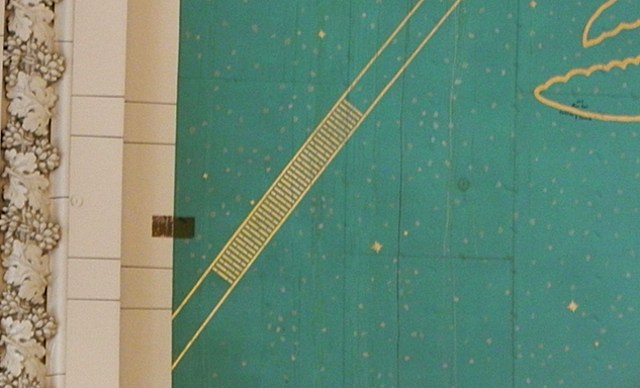 The dark patch, formed by over 100 years of dirt, is mostly from cigarette smoke, and the MTA's Marjorie Anders explained to us further today: "The remaining dirt is a combination of tarry nicotine from the millions of cigarettes, cigars and pipes once consumed in the Terminal by generations of travelers and the soot and steel dust that stuck to it. Smoking was banned in Grand Central Terminal in March 30, 2003, the same time the ban went into effect citywide."

She went on to tell us, "The area was left untreated by the cleaning solutions so that future preservationists will be able to tell if those solutions [used for cleaning] had any impact on the ceiling materials themselves. This is common practice among restoration artists." But it also provides a cool "before and after." Although, not everyone was on board with the idea of not washing this section, Anders explained:

"It is a little known fact that many folks at the railroad did not want to leave a dirty patch. They wanted it all cleaned. Because I was frequently up on the scaffold with journalists during the restoration work, I got to know the crew doing the cleaning. They wanted to leave a 4-foot by 8-foot section uncleaned. But the General Superintendent of GCT would have none of it. In the end, on behalf of the two women who did most of the cleaning, Mary and Marina, I appealed to the President of the Railroad at the time who agreed to leave a much smaller patch. It has been a public relations boon and proof to all of the benefit of cleaning the ceiling."

The patch is somewhere around 9 x 18 inches. 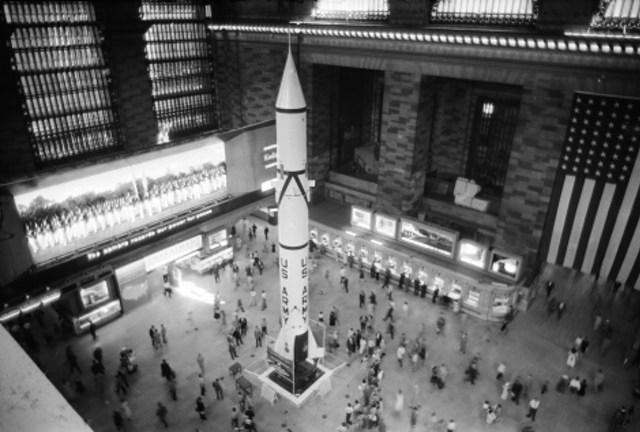 (Courtesy of A Birthday Book)

Long before any of that, the ceiling received a bit of a puncture wound when a massive Redstone missile was on display in the 1950s. The day it was brought in—July 7th, 1957—the NY Times wrote, "The two main components of the huge weapon were to be taken off flatcars at 6 a.m. and moved into the concourse through the gate to Track 16 by 9 a.m. The Track 16 gate is believed to be the only entrance in the terminal wide enough for the missile. The Redstone, which is sixty-three feet long, is to be assembled in the concourse and then hoisted into an erect position on its five-foot-tall launching platform. A hole had to be cut through the concourse ceiling to accommodate cables that will help to steady the huge rocket." You can still see the hole today, which is near the fish on the west end.

The ceiling's least kept secret? The mural itself was painted on backwards, which was first noticed shortly after the Terminal opened in 1913 by an astute commuter from New Rochelle. The NY Times reported, "Officials didn't deny the charge that things were a bit mixed, but held that it was a pretty good ceiling for all that. Paul Helleu of Paris and Charles Basing of Brooklyn were the artists. Mr. Basing showed little interest in the technical defects and added that he thought the work had been done very well."

For more secrets of the station, revisit our post from 2008.

#ceiling
#grand central terminal
#secrets
#original
Do you know the scoop? Comment below or Send us a Tip