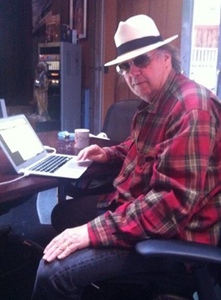 It's been a very busy year for everyone's favorite model train enthusiast—among other things, Neil Young has released a rambling but entertaining autobiography ("Waging Heavy Peace"), gone on tour with Crazy Horse (which included a thunderous set at Central Park in late September), released a new film with Jonathan Demme, and an album of classic covers (Americana). But today, in anticipation of next week's release of his new album Psychedelic Pill, Young will gather us around the Twitter fire at 3 p.m. EST and answer all your questions about pot smoking, Archives Vol. 2 and heroin addiction.

Yes, the famously technology-curious Young will be answering questions on Twitter via #AskNeil. And so far, there have been a surprising amount of questions from the parents or friends of heroin abusers (there's also been a fair share of questions about when Young will FINALLY release the glorious and long out-of-print Time Fades Away).

While you try to nudge your CSNY reunion query his way, go ahead and take a first listen to Psychedelic Pill, which is now streaming on his website. It's his first album of all-original songs with Crazy Horse in almost a decade, and it's probably the best album he's done since 1994's Sleeps With Angels (with a respectful nod to the underrated Prairie Wind).

Update: Young is really embracing the minimalism of Twitter. Here's, um, a few of his better answers so far:

@adizzca I was reading something... what was it... it wasn't that good... so I stopped reading it #askneil

##askneil
#grampas
#Music
#neil young
#rock
#the internets
#twitter
Do you know the scoop? Comment below or Send us a Tip