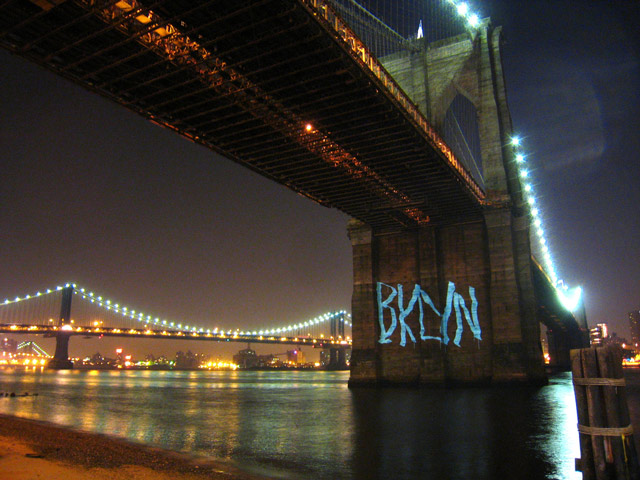 The New York Times profiles James Powderly and Evan Roth today. The robotics engineer and Parsons grad formed the Graffiti Research Lab in 2005 as a design studio focused on developing methods of urban communication. One of their recent creations is an oversized tricycle equipped with a video camera, a digital projector, a laptop computer, and speakers. The setup can be used with a green laser pointer to project light graffiti onto different surfaces. "The idea is to put the tools for unfiltered, unsanctioned public expression in the hands of those who might otherwise shy away from grabbing a spray can or a paint marker."

Graffiti Research Labs has done other eye-catching work around the city, including Throwies, which are clusters of LEDs attached to a magnet that can be thrown and stuck to metal surfaces. Powderly and Roth's work, along with others as GRL, is part of the Eyebeam OpenLab project. Eyebeam is a group committed to open source R&D with all technology released to the public under a creative commons license. The Graffiti Research Labs flickr pool can be found here.

(Untitled photo of GRL projection onto Brooklyn Bridge, by urban_data at flickr)