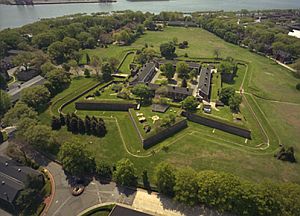 Although the proposed redesign to Governors Island won’t be finished until at least 2013, the island’s administrators are coming up with plenty of reasons to pay a visit today. Starting May 31st, the island, which has expansive parks, a full-circle bike path, former military bases and a spectacular view of Brooklyn and lower Manhattan, will be open on more days and for longer hours than ever before. And the calendar of concerts and events is said to be expanding.

Most noteworthy is a just-announced free concert by the New York Philharmonic, which will mark their first visit to Governors Island and a new stop on their annual Concerts in the Parks summer series. Set for Saturday July 5th, the program promises works by Rossini, Copland, and Rimsky-Korsakov, as well as Tchaikovsky’s 1812 Overture, accompanied by the requisite fireworks display. The orchestra will perform on the island’s Parade Grounds, with the Lower Manhattan skyline as a backdrop.

On the other end of the musical spectrum, moe., jam band keepers of the Phish phlame, are playing a gig on June 15th as part of the Highline Ballroom’s Governor’s Island concert series. These shows, which so far include the Grateful Dead tribute band Dark Star Orchestra and The Saw Doctors, are definitely not free. But Olafur Eliasson's ambitious NYC Waterfalls costs nothing, and visitors to the island will be able to marvel at his 120-foot tall waterfall on Governors Island's north shore, facing the Battery. For more information, check out the island's website.