Governors Ball 2014: Bringing Back The Sweet Sounds Of The Mid-00s 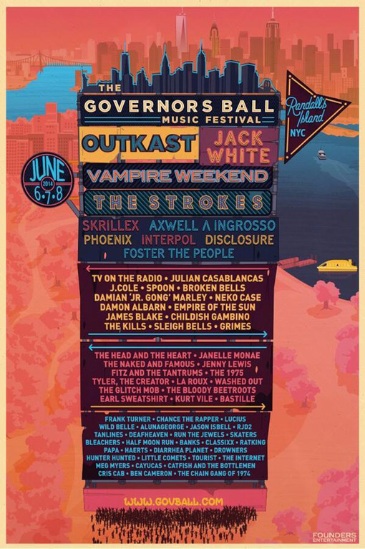 Last week it was announced that the newly-reformed OutKast would headline this year's Governors Ball on Randall's Island. There were also hints that Phoenix and the ghosts of Tupac and Biggie would also be in attendance. Today, the festival released the whole lineup with a full-page ad in the NY Times, and with headliners such as The Strokes, Jack White, Vampire Weekend, and Spoon, it's a veritable timewarp back to the heady days of the mid-00s.

Other notable bands on the top of the billing at the festival, which will take place from June 6th to June 8th at Randall's Island Park, include a solo Julian Casablancas (The Strokes weren't included in the initial advertisement, but were added to the bill this morning, so Casablancas will be pulling double duty), Interpol, Foster the People, Skrillex, TV On The Radio, Blur's Damon Albarn, Neko Case, Disclosure, James Blake, Grimes, Janelle Monae and Sleigh Bells. Only four of these groups weren't around in the mid-00s.

Tyler, The Creator, Washed Out, Kurt Vile, Broken Bells, Deafheaven, and lots of others groups are on the lineup as well, as you can see in the fine print. Tickets are on sale now. Just make sure to bring your mud boots with you.

#governors ball
#jack white
#Music
#outkast
#randall's island
#spoon
#The Strokes
#vampire weekend
Do you know the scoop? Comment below or Send us a Tip