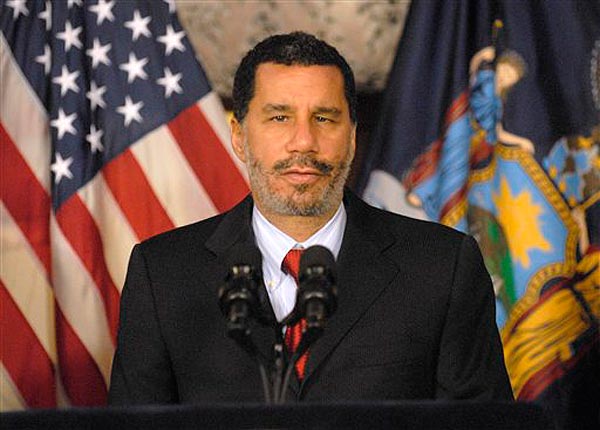 If Fred Armisen plays any black politician, please let it be NY Governor David Paterson! His impression of our "accidental" governor debuted on Weekend Update last night and it absolutely killed. For reference, we've placed a photograph of Paterson above—compare it to the SNL bit below:

Paterson-on-SNL was ostensibly discussing who will take over Hillary Clinton's Senate seat, but these points were covered or implied:

But Paterson wasn't done there. After nearly breaking Seth Meyers during Update for the second week in a row, Armisen had a little fun with longtime castmate Amy Poehler. At the end of Update, Poehler paused to say her final goodbye to the show, almost getting a little choked up in the moment, when the governor stumbled in front of the lens while phoning for "circus tickets" (what Poehler had just revealed is code she uses to her weed dealer). The sketch at that point had now taken on an almost Mr. Magoo level of absurdity.

It all seemed a fitting farewell for Poehler, who along with Tina Fey, brought a certain grounding to the show throughout the past decade, while simultaneously relishing in sillyness and the utterly ridiculous. Video of her goodbye along with last night's digital short, Armisen again as a cookie-crazed office worker, after the jump...

Poehler's final SNL brought a cameo from Maya Rudolph to revive the duo's middle-aged ladies in heat as hosts of local talk show Bronx Beat. But where's the video love, NBC? Speaking of which, we know that NBC never seems to release video of the musical performances, but Kanye West from last night would have been a good exception. Kanye performed in front of an intense video screen (complete with a cameo from Elroy Jetson) that felt like the sort of thing you'll catch on Comedy Central in ten years ad wonder if 2008 was actually a lot stranger than you remember. He also used a voicebox that someone described as "singing to a 56k mp3 backup band."