Every so often, Craigslist offers a tantalizing opportunity to leave behind your humdrum NYC existence and start life anew. A few clicks are all that separate your workaday office job from daily strolls with Henry the tortoise through Central Park, your overpriced apartment from a rent-stabilized houseboat on City Island. You'll never actually do it—you're a coward, and terrified of water rats—but it's nice to know the option is there.

Earlier this week, the free section of New York's digital classified presented us with the chance to imagine: What if we owned a charming double-decker British bus? What if we drove around the city picking up stranded commuters, wearing a conductor's cap and ringing a little bell when the tea and crumpets we'd prepared upstairs were ready to be served? And wait, is that a thatched roof and window boxes?! 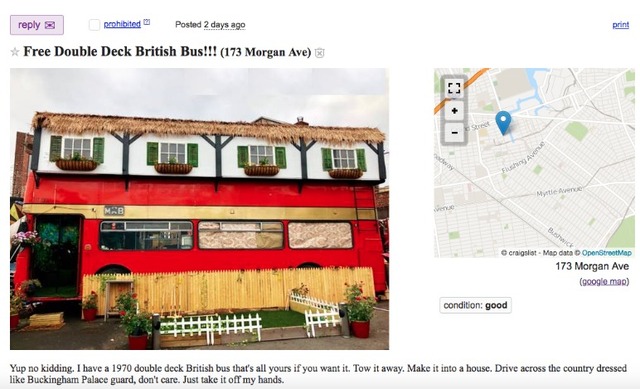 "Yup no kidding," the post began, reading our minds. "I have a 1970 double deck British bus that's all yours if you want it. Tow it away. Make it into a house. Drive across the country dressed like a Buckingham Palace guard, don't care. Just take it off my hands."

Deciding that we would adopt the bus and work out the details later, we set out to see for ourselves. The listed address turned out to be Arrogant Swine, the whole hog "Church of Pork" opened by famed pitmaster Tyson Ho in Bushwick a few years ago. Sure enough, the bright red double-decker bus was just sitting there in a lot off Morgan Avenue.

A family of cats also appeared to be living inside the vehicle, which only sweetened the deal. 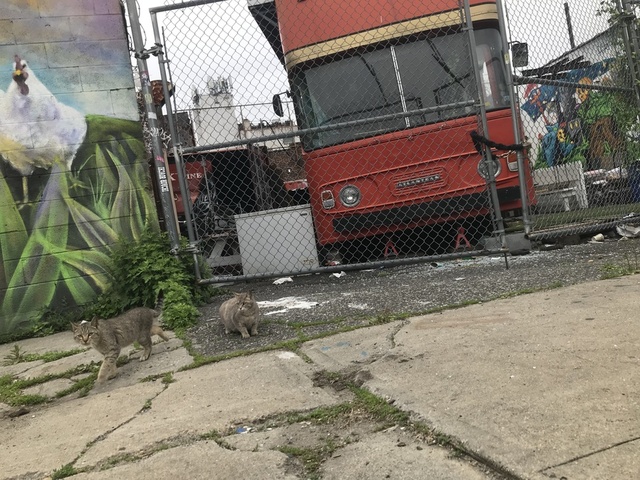 Unfortunately, our dreams were soon crushed when we inquired about the posting. Someone had beaten us to the punch, and would be coming to haul away the glorious vehicle on Thursday.

The afternoon took a weird turn shortly after, but first we were able to piece together a little information about the origins of the bus. The restaurant's general manager told us that the vehicle had arrived in the backyard last April for an interactive pop-up experience called "Mad Hatter's (Gin &) Tea Party," an Alice In Wonderland (and sometimes Breaking Bad) themed immersive pop-up experience in which attendees dress up and drink cocktails on a stationary bus. Several of these soirees were hosted last summer in Arrogant Swine's backyard.

But when the events company responsible for the parties, Fever Up, decamped for Los Angeles last year, they left their giant bus behind, the manager said. After initially promising to take care of it, Fever Up has allegedly gone silent—much to the growing frustration of the smokehouse's staff. (Efforts to reach Fever Up were not successful).

"We contacted everyone [at the company] we could," the manager told us. "We're stuck with it. It's not drivable."

Tomorrow marks your last chance to join us for tea! Our tea party officially ends this Sunday and we have limited tickets available. Grab yours today!

This employee—who seemed to know a lot about bus history, even if he did not appreciate this particular bus—said that the vehicle had made the 3,000 mile journey from the U.K in the 1970s, as part of a failed effort to adopt the iconic London symbol in the United States. Indeed, eight Leyland Atlanteans were shipped to New York City in 1976, but were soon cut by the transit authority when it was discovered that the buses were too tall to be used on Fifth Avenue, and lacked satisfactory air conditioning.

(It's unclear if this bus was part of New York's erstwhile fleet, as the manager told us that Fever Up had actually found it abandoned in a lot in Philadelphia. This is apparently how double-deckers are handed down.)

The MTA has flirted with bringing back double-decker buses more recently as well: a trial program launched in 2008 was quickly pulled because of more technology issues; as of last year, a new double-decker pilot project is underway on Staten Island's express bus route.

Unfortunately, we were not able to learn much more, including the employee's name. As we were admiring the bus, Tyson Ho, the aforementioned pitmaster, showed up and demanded we leave the premises. For reasons that remain unclear, he then called up the new owner of the bus and told them not to talk to us either (Come on!). When he began waving a large butcher's knife while adamantly insisting that the bus transaction was a private matter that we shouldn't tell anyone about, we decided to call it a day.

In the end, we returned to our dull, double-decker-bus-less lives even more confused than before. Craigslist, man.

Are you the new owner of this sweet ride? Pick us up!

UPDATE: Following publication of this article, Arrogant Swine proprietor Tyson Ho called to inform us that the bus was not abandoned by Fever Up, but by the person who ran the Madhatter event (which Fever Up helped promote). That individual previously planned to “move the bus to Los Angeles or Miami,” but then “just up and left.”

“Our issue isn’t with Fever, it’s with this dude,” he explained. Asked what would become of the bus under its new owner, Ho replied: “No idea. Probably a lawn decoration.”