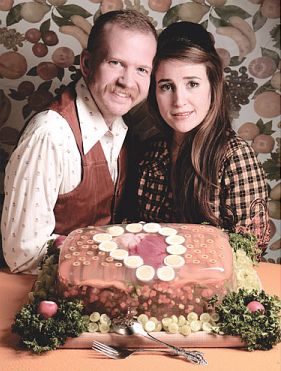 The most exciting story in New York theater this year had nothing to do with the Broadway stagehands' strike, it was the vibrant growth of what used to be called “experimental theater”, a movement that can now really only loosely be defined by what it’s not: non-naturalistic and not made for TV, with an emphasis on bold physicality, collaboration and, sometimes, multimedia.

This aesthetically diverse body of work is generally classified as Off-Off-Broadway (some dub it "indie" theater) and it's where electricity has the greatest shot at crackling. 2007 was a great year for it, as the spark that’s passed on from trailblazers like The Wooster Group and Richard Foreman, to innovators like Elevator Repair Service and Radiohole, continued spreading among companies such as The Debate Society, The Nature Theater of Oklahoma and Theater of a Two Headed Calf.

This is why it was so striking that the top theater critics at the New York Times seemed disinterested in theater during the Broadway shutdown – critic Charles Isherwood caught up on Friday Night Lights; Ben Brantley left town altogether. As a growing number of theater bloggers have somewhat stridently observed, the editorial drift of the Times's theater coverage has, with notable exceptions, seemed increasingly out of touch this year.

Don’t mistake us for utter aesthetes – we enjoy a well-done Broadway spectacle or naturalistic dramedy as much as Aunt Maud from Mineola – but the big news of 2007 is that New York is in the midst of a blooming renaissance in formally adventurous theater, and Aunt Maud wouldn’t know it from the Times’s Arts & Leisure section. Sure, maybe Aunt Maud wouldn't care for some of it, but we think she should be given the benefit of the doubt. (And we bet she would have gotten into No Dice.)

Before the current fall theater season started, we surveyed many of the highlights of the previous year and authoritatively declared a bunch of ‘best this’ and ‘worst that’; it’s all here. But after the jump are some things we omitted, as well as some urgent news for fans of John Turturro and Samuel Beckett. (Photo of Hannah Bos and Paul Thureen in The Debate Society's The Eaten Heart by Trevor Oswalt.)

Best Actor: Declaring anyone the best of anything is reductive and absurd, unless we’re talking about Harold Pinter and his masterpiece The Homecoming. It may just be because we recently saw this impressive revival, but we have to give special praise to Raúl Esparza’s performance. Even in an ensemble filled with heavyweight talent like Eve Best, Ian McShane and Michael McKean, Esparza stands out for his riveting depiction of Lenny the pimp. The stunning production coincides with the 40th anniversary of The Homecoming’s Broadway debut and it’s a must-see, as provocative and affecting as ever.

Best Actress: (Ditto disclaimer above.) We’ve seen Hannah Bos perform in two shows during the past year, on both occasions with her collaborators in The Debate Society. And in just those two productions, Bos and her on-stage partner Paul Thureen have played probably three dozen different characters. Her style is as nuanced as it is ingenuous, and with all those myriad characterizations there was hardly a single superlative gesture or unnecessary embellishment. Also, like Thureen, she’s wickedly funny and fearless.

Best Site Specific Show: Bird Eye Blue Print. Taking place in an abandoned office space at the World Financial Center, Lisa D’Amour and Katie Pearl’s astonishing ensemble piece transformed the office rooms into a mystically-charged alternate reality, where a hallway could be an optical illusion, and a room covered with lists and hanging light bulbs could approach the sublime.

Best Critical Pan: Ben Brantley’s review of Young Frankenstein in the Times featured such gold star pull-quotes as “I laughed exactly three times.” “There are some enjoyable musical routines. (All right, my count is 2 out of nearly 20.)” And “It leaves you with a monster-size headache.” Devastating stuff, and it didn’t make a dent – the tourists are quite happy with their recycled one-liners, thank you very much Big Ben. It also didn’t hurt that just after Young Frankenstein opened, almost all of Broadway was shut down by the strike, except for Young Frankenstein (and a few others) who had separate contracts with the union.

Best Ongoing Source of Mildly Idle Chatter: Again with the New York Times! In May Managing Editor Jill Abramson (remember her?) supposedly got into a nasty dinner party argument with playwright David Hare, a spat that culminated in Abramson (reportedly) declaring, “We are the central arbiter of taste and culture in the city of New York.” Abramson’s remark, if she was accurately quoted by, um, Page Six, may have been arrogant, but in one sense it’s very true: the Times is still considered by many the authoritative voice in theater criticism; a favorable Times review can pump up a career more powerfully than any other media organ.

This power is made all the more striking by the increasingly middlebrow tone of their criticism, distinguished – with exceptions – by conservative editorial choices and a house style that in 2007 repeatedly viewed theater through the prism of television. The bottom line is ironic; while we can’t dispute the Times’s weight, we also don’t expect insight into exciting new work from them. For that there’s The Brooklyn Rail et al. And in a paradigm shift that can’t happen fast enough, playgoers can also take advantage of a growing community of online theater obsessives. (The blog aggregator Theatreforte is a good place to start; you’ll find a massive New York theater blogroll on the left, God help you.)

Most Exciting Celebrity News Announced This Year: Is it John Turturro’s upcoming performance in Samuel Beckett’s Endgame at BAM? Or Daniel Radcliffe bringing Equus and his naked self to Broadway next fall? There will be just 24 soon-to-sellout performances of Endgame; tickets go on sale to non-BAM members on January 2nd.