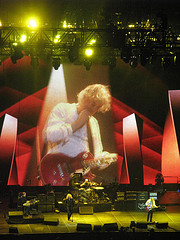 Led Zeppelin Reunite, Songs Remain the Same
Aside from a reanimated corpse Beatles reunion, there is not another dormant band in the world that could cause more excitement getting back together than Led Zeppelin. So, for the first time in 19 years, with Jason Bonham in for his late father behind the drums and the rest of the original pieces in place, the band picked up where they left off, playing a Greatest-Hits set to a beyond sold out O2 arena in London earlier this week. The band sounded remarkably on point for a group of guys who hadn't appeared on stage in two decades, seeming to having a total blast playing with each other. To the surprise of nearly everyone, they even dusted off Stairway to Heaven and gave it a go, putting every miserable bar band for the last 30 years to shame. Will they do it again? Maybe come stateside, play a couple nights at the Garden? Time will tell. In the meantime, check out the many clips on youtube (before they all get taken down.) (pic via positivelypurple's Flickr)

A "Fiery" Neil Young Concert Series
While we haven't heard one report that these shows were anything but incredible once Neil took the stage, there sure was plenty of hassle and complaints leading up to the set time. First off, tickets to see the relatively healthy and active performer were upwards of $200. Not that it deterred fans from buying up every last ticket for all 6 nights, but it certainly cut into the enjoyment for some. On top of that, right before the first show was about to start, the Fire Department conducted an unexpected inspection that kept the 3,000 fans waiting out in the cold for hours before the show before being allowed inside. At least Young acknowledged the delay, calling it a "bullsh*t excuse" and pulling the opening set by his wife, Pegi, to make up for lost time. He played again last night and has 4 more hopefully incident free shows to go through the rest of the weekend. 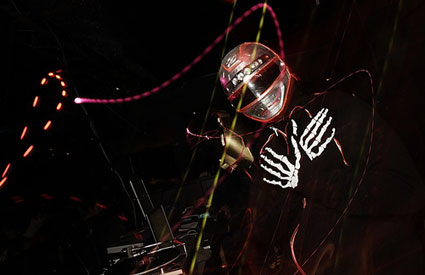 Faux Punk!
It's a rule (as long proven by the aforementioned artists), that if you're got a great live band, and you don't tour all that often, there needs to be a tribute band out there to pick up the slack. Now that Daft Punk has officially won over the hearts and minds of New York City, Faux Punk is here to help bridge the gap until the next DP arrival. Performing at the official release party for Daft Punk's new live album, the faux duo donned space helmets and took it to Studio B, DJing all the Daft hits and a few tracks featuring their samples. Is this the last we've seen of Faux Punk? Doubtful. There should be some downtime until the real deal finds its way back to New York. These two come nowhere close to filling the void, but it's still tons of fun. (pic via Bao Nguyen at Brooklyn Vegan)

#Arts and Events
#bar
#brooklyn
#Brooklyn Vegan
#city
#concert
#daft punk
#fire
#fire department
#flickr
#fun
#led zeppelin
#london
#Music
#neil young
#new york
#new york city
#O2
#photos
#punk
#studio b
#this week
#week in rock
Do you know the scoop? Comment below or Send us a Tip
A new Gothamist is coming! We’ve moved comments over to our beta site. Click here to join the conversation and get a preview of our new website.