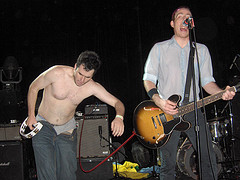 Naked Guy at Ted Leo Concert
It's a tad early for year end awards, but this story is making a strong, late push for the greatest live moment of 2007. At the Ted Leo show at The Music Hall of Williamsburg Wednesday night, some dude from Jersey took off his shirt and threw it on the stage. Not satisfied with merely being topless in a crowd on that snowy night, he eventually followed the shirt and joined the band up on stage, acquiring an impromptu tambourine to play during the next song. He then continued on by, we kid you not, emptying his wallet into the crowd, "making it rain," if you will, then pummeling himself with a microphone before getting completely naked and dragged offstage by security. Props to Leo for holding it together throughout the ordeal, which hopefully is not something he often has to deal with. Rock n' Roll, woooo! (pic via Arambulo's flickr)

Stolen Transmission has Ended
Well, not completely finished, but it's back to basics for Ultragrrrl and pals, whose record label was recently cut loose by parent Island/Def Jam. While there were actually several quality releases that sprang from the label, they mostly seemed to fly a bit too far under the radar to make a major label happy. That, combined with the current topsy turvy state of the industry these days, makes the decision seem sensible on paper. Regardless, Sarah Lewitinn seems to be re-energized by getting cut loose, and is moving the whole operation back to her bedroom to start over again. She insists that it's otherwise business as usual for the label and all the bands. We wish them all the best going forward.

Grammy Nominations Announced
Just in time for a pre-holiday sales push, the Grammys announced their nominations earlier this week. No huge surprises here, unfortunately. These awards always seem to recognize a balance between the old-school establishment and the hot acts du jour, and this year is no different. Kanye was the big winner so far, with 8 noms including Album of the Year. Trainwreck of the year Amy Winehouse trailed him with 6. Not a whole lot of prominent New York artists to speak of in the major categories, but our friends across the river saw a bit of action. Bon Jovi and Bruce Springsteen both got a few nominations in the Pop and Rock categories. The awards will air on February 10th. In the meantime, see if you can figure out when Herbie Hancock's potential "Album of the Year" was released, and who, aside from Grammy voters, knew it even existed.