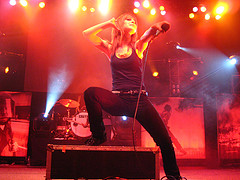 Paramore Arrives
One of our favorite albums of the year is by these girl-fronted teenage pop-punkers, and they were in town this week to headline their largest local show yet at Roseland Ballroom. It was the last show of a massive national tour, but you wouldn't know it seeing front woman Hayley Williams running around stage with the rest of her band. Paramore may not win any originality contests, but they've got more fire and energy on stage than anyone we've seen in a long long time. The crowd was in a total frenzy, shouting along to every word. We loved every second of it as well, right down to the serene Sunny Day Real Estate cover they threw in halfway through, citing them as a major influence on the band's development. See some great pictures at Ryan Dombal's and Fueled by Megan's (right) Flickrs.

Snapcase Reunion
It's been nearly three years since the 90s hardcore institution Snapcase had last taken the stage, but for 2 nights last weekend in Brooklyn, it was just like old times. Brought out of retirement to raise money for Callum Robbins, former Texas is the Reason Guitarist Norman Brannon (who we interviewed when they reunited last Thanksgiving) put the benefit show together as also a celebration of the release of his excellent new book, the Anti-Matter anthology. There was plenly of nostalgia flowing through the crowd at the Music Hall of Williamsburg those nights, and even a couple surprise guests, including Thursday front man Geoff Rickly, who came out to perform with openers 108. See some pics over at Late Night Wallflower.

It's ODB's New York, We're Just Blogging About It
Wu-Tang fever is about to crack 105 degrees. Not only has their first new album since 2001 leaked, with a release date right around the corner, but they've got a big homecoming show at Hammerstein coming up in January. This week also memorialized the death of Ol' Dirty Bastard, who died suddenly in the recording studio 3 years ago last week. In honor of Rap's antihero, Gridskipper put together ODB's NYC featuring various locations around the city that Big Baby Jesus made infamous. It's a fun look back at a classic local character. While we're happy Wu-Tang has continued on without one of their most popular members, they will certainly never be the same again. He is missed.