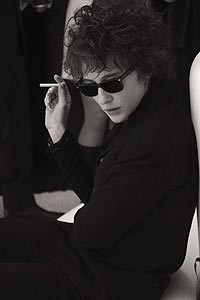 I'm Not There Nails It
We went into seeing I'm Not There yesterday afternoon kind of expecting to hate it, thinking it would be vague and pretentious and a chore to absorb. But boy were we wrong! The movie avoids many annoying biopic clichés, presenting 6 separate, yet surprisingly straightforward stories based on the life of Bob Dylan. While non-linear, the narratives are complete and engrossing. The film is shot beautifully, and needless to say the music is great, complementing the stories perfectly. The whole package was an absolute treat. Go see this movie as soon as possible.

Sly Performance
For the first time in over 30 years, Sly Stone took a stage to perform in New York City Tuesday night. While Sly's recent appearances, such as the 2006 Grammys, have been controversial and embarrassing to many of his fans -- he and what's left of his band seem to have finally hit a somewhat stable groove, performing together more and more. This week, he exceeded expectations by playing 2 entire sets all the way through. The band will be back at BB Kings on December 7th, hopefully in equally good spirits.

Stevie Wonders
While it may not be quite as rare as a Sly Stone spotting, Stevie Wonder still dazzled a sold-out crowd at The Garden this week. This was the legend's first headlining show in 12 years, he played an impressive 2.5 hour set that churned out non-stop hits the entire time. Tony Bennett came out to sing a duet, and Prince had a guitar cameo as well. While some fans were a bit miffed with the $150+ ticket prices, nobody left at the end of the night not getting their money's worth.