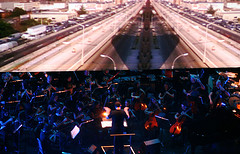 Sufjan Keeps it Local
We really enjoyed Sufjan's BQE show last Friday at BAM. It was a great, refined, change of pace evening for the indie rock crowd. The evening was really a sum of it's parts, all told. The entire presentation of the BQE piece was far more engaging than the actual music itself. It was solid, but not up to Suf's lofty magical standards. But the little things...the gritty video clips of the highway, the live hula-hoopers, the orchestra coming in and out of view, all together created a great total moment. While we patiently wait for "Maine" or "Oregon" or wherever the next "State" album will be, we're glad he's out there trying new things, appealing to different fans, and testing the limits of his talents. (pic via metrolens' Flickr)

Grizzly Bear Step it Up
While the inevitable backlash towards an uber-popular buzz band comes, the easiest bone to pick is that they don't hold up as a live band. While we had been hearing some murmurs lately of this to be the case with local heroes Grizzly Bear, it seems that their performance at the Wordless Music Series last Saturday night put many criticisms to rest. Perhaps it had been too long since our friends last saw them. It's been since March when these boys last headlined their own show in the city, and there is no doubt that the non-stop touring for the last 7 months has greatly benefited their development as as band. Between this show, and a well-received new EP, we are increasingly excited to see where they go from here. 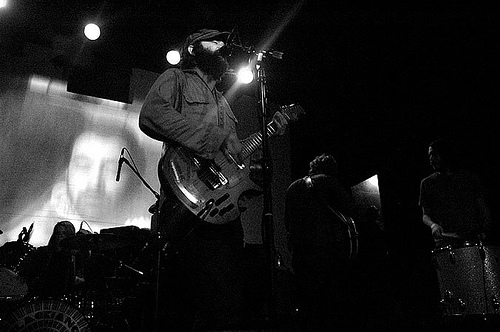 The Black Angels Impress
The Black Angels are one of those bands that we've been listening to forever, but never actually got to see. Last Wednesday, we finally made it out to Bowery to catch them headline their biggest local show to date, and were quite taken back on how much goes into their live show. Aside from the thick, haunting tunes, the band travels with a reel-to-reel projectionist and a live overhead projector artist. The former would regularly switch in and out old black and white movie clips, while the latter experimented with pouring and manipulating inks in time with the music. It was truly one on the most unique and engaging live shows we've witnessed lately. Highly recommended the next time they come through town. (pic via Jonny Leather's Flickr)