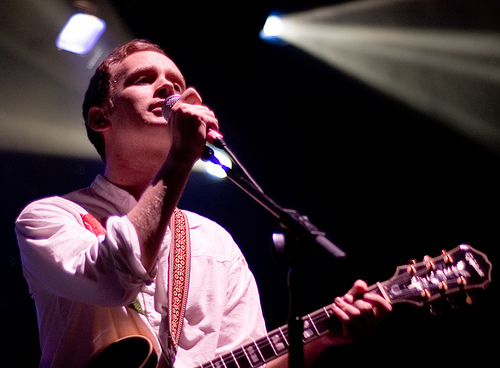 Not So Silent, Jens
Jens Lekman is one of our favorite songwriters, so any opportunity to see the funnyman crooner play is a treat, no matter the circumstances. The set at Webster Hall was generally excellent. Bordering on Magical, in fact, a perfect mix of his old and new -- mixing in Swedish deadpan quips and stories the whole time through. The only knock we had came from the venue, which we usually enjoy. The sound was fine, the site lines were good, the bands came out on time, but on this night, they started opening up the night club a little bit earlier. Around 30 minutes into his set, the thumping dance beats could be felt through the floor loud and strong enough that you could actually make out the song at times. It was distracting, to say the least, especially during the quieter songs. It even forced a puzzled Jens to ask what was going on during his encore, before attempting to play along to the beat. Webster Hall has taken giant strides over the last few years to become a perfectly good rock venue, but an extra layer of soundproofing would go a long way to remove the cheesy dance club stigma for the concert attendees. (pic via Ryan Dombal's flickr)

Ryan Adams is a Halloweenhead
Perhaps on the one day of the year where you'd want Ryan Adams to let loose a little, act goofy, show a little personality...he plays it dead straight sober all night. Not a problem, as the 3 hour plus Halloween set he and the Cardinals delivered at Hammerstein Ballroom this Wednesday had them sounding better than ever. It stayed dark and mellow most of the night, and sure, there was a bit too much dragged out instrumental doodling at times, but even that seemed to work more often than not. Hopefully, this new, focused Ryan is a permanent direction and not just a costume. We like where he’s heading.

The B-52s Bring the Rapture
A bit further uptown, The B-52s brought the party like none other. A high energy set from the party music legends had the costumed droves at Roseland dancing and smiling from ear to ear. The band is due to release their first album in 16 years in a few months, and played several very well received new songs throughout their set. In an odd yet kind-of-perfect pairing, the disco-punkers The Rapture opened the show, destroying a potentially unsuspecting audience with their new-era party raves. We loved the idea of these two bands sharing a bill, and hope they extend it to a cross-generational tour in the near future.

#cardinals
#dance
#halloween
#hammerstein ballroom
#jens lekman
#Music
#photos
#ryan adams
#The B
#the rapture
#webster hall
#Wednesday
Do you know the scoop? Comment below or Send us a Tip
A new Gothamist is coming! We’ve moved comments over to our beta site. Click here to join the conversation and get a preview of our new website.