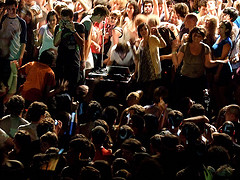 Girl Talk Double Dip (in Puke and Booze)
Those who missed out on getting tickets to the electrospazzy one-two punch of Dan Deacon and Girl Talk at Webster Hall last Saturday night fell into a bit of luck as the weekend approached. A last minute, late night show was announced for Bowery Ballroom that same night, and the formerly out of luck were now sitting pretty, seeing the two perform in a smaller room at a better hour and for less money. Great deal, right? Well, not so fast. By the time Dan Deacon came on around 12:45, the place was a total disaster. Puke in every sink, girls crying on the sofas and drunk kids getting hauled out of there so frequently by security it started looking like a WTO protest. While this didn't directly affect the music, Girl Talk in particular, who then followed Deacon's hypnotizing set, relies so much on the behavior and interactivity of the crowd that it really became quite a chore to enjoy. Far be it from us to tell the majority of the crowd at a concert they were behaving poorly, but surely we weren't the only ones who were distracted and annoyed my the amateur antics on display. Then again, maybe we've just outgrown the shtick. (pic via JKART's flickr)

Black Lips Slosh Through Brooklyn
While Girl Talk seemed a bit much for all the wrong reasons, the over the top audience for the Black Lips show at the newly minted Music Hall of Williamsburg was a breath of fresh air for the indie rock scene. Genuine enthusiasm sprang from both the band and the mosh pit, as The Lips tore through an hour long set of filthy, effortless southern rock gems to a sold out room. It's tough to talk about this band without bringing up stuff like the on-stage vomiting, fans hanging from the balcony and the lead guitarist's platinum grillz -- but antics aside, these guys undeniably deliver once on stage. They churn out hit after hit with this believable careless swagger. Not every note is perfect, and the lyrics are completely unintelligible, but they feel legit, like a real rock and roll band. Something that's been missing from the mid-sized clubs for a while now. Welcome back.

7WTC Concert Series a Hit
Without getting too much into the politics of the matter, it was exciting to see the 7 World Trade Center concert series go ahead this week with three impressive days of free, top tier music from a variety of bands. Monday brought the Hold Steady and Old 97s, Tuesday was M. Ward, and Wednesday Nick Lowe. The after-work series, whose stage stood at the base of the rebuilt 7WTC, was a treat for those downtown who are likely going through some post-season free concert withdrawal. For Rhett Miller, lead singer of the Old 97's, this concert was his first trip back downtown, since fleeing rubble and finding himself homeless 6 years ago. Check out this video, with Ground Zero providing an ominous backdrop.