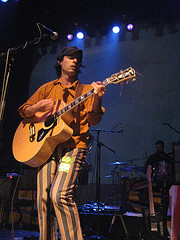 Clap Your Hands Back in Town
After several months of playing massive festivals around the world, The original blog-band returns home. And you know, just because blogs don't follow these fellas' every move anymore doesn't mean that the DIY posterboys aren't still out there selling out clubs and supporting their sophomore album. They played a few local shows this week and their ever-improving live act was tight and on point at the Music Hall of Williamsburg and Gramercy Theater (where Natalie Portman turned up to catch their set). These two shows kick off a good old fashioned cross-country club tour with Elvis Perkins and Deerland, which will wind back up here for 2 more sold out concerts at Bowery and Studio B in November. While they stuck to a set of already released songs this week, we hope maybe we'll hear reports of some new songs on this tour. Seems like they’re about due. We shall see. (pic via Tomiffy's flickr)

Ludfest Brings us Back to a Better Time
We were quite taken with nostalgia when we read aboutLudFest last Sunday. Several very talented local bands playing a free outdoor show on the block that has become the center of the Lower East Side re-popularization. The lineup was made up of some longstanding local bands we've grown to love over the last few years, featuring a restructured Secret Machines, a suddenly hot Place to Bury Strangers and Movable Hype 2.0 alums Other Passengers. The show ran a bit late, pushing headliners Secret Machines inside at Pianos, but the crowds came out all day to celebrate what is likely to be one of the last beautiful afternoons of the year. While Brooklyn has predictably held most of our favorite outdoor music events this year, it was great to see the LES represent well, one last time.

What's Left to Say About the VMAs?
In the end, after all the discussion and attention the "awards show" received, people who watched the VMAs this year fell into three camps: older viewers who couldn't follow what was going on, older viewers who pretended to follow what was going on to not appear out of touch, and younger viewers who couldn't follow what was going on. It was a desperate train wreck, and most everyone agreed that it was a giant flashing Las Vegas neon sign that MTV has officially lost its grasp on youth culture. Perhaps this will officially represent rock bottom for the network? Is an upswing in relevant and innovative programming to come? Hopefully MTV will look beyond their respectable ratings for the show and see a dire need to change gears quick. Even long past when they stopped regularly showing videos, MTV represented (to some degree) the forefront of a rather large segment of society -- it was edgy and cool, and that wasn't always a bad thing. They need to figure out a way to get that back, pronto. We’re well over MTV being only about music...we’d settle for watchable at this point.