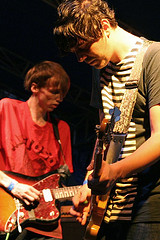 Battles vs. Deerhunter by the Sea
A fine way for the Seaport Music Festival to send off the summer, with two of the year's biggest breakout bands on a lovely evening. We were taking in both Battles and Dearhunter for the first time last Friday and were massively impressed by both bands. Deerhunter, down a man and with their usual shtick toned down, sounded like a young Sonic Youth or stripped down Broken Social Scene. A much lighter and more accessible experience that we had prepared for by listening to their thumping album. Battles was more what we expected, playing a hypnotizing hybrid of Math-Metal and some Jammy-Groove stuff that somehow works. Stereogum has some pretty pics.

And so, that’s it for the free outdoor summer shows this year! Our spoiled, freeloading selves will have to start bundling up and paying for tickets to see hot bands coming through town. Summer, you will be missed. (pic via Jalepano's flickr)

Matt and Kim Still Willing to Play Anywhere, Everywhere, All the Time
The fun part about a band like Matt and Kim getting popular is that while they'll open for big bands and play to massive crowds, they'll always be happy to return to playing a random basement show every once in a while. Last Sunday, on a quiet Labor Day eve, vLES (aka the Virtual Lower East Side) held a special concert at everyone's favorite slanted underground venue. The room was packed and the crowd was, predictably, bananas. Crowdsurfing, twisted ankles, missing shoes...we've heard some wild stories firsthand from that night, though official reports on the web seem surprisingly scarce, it sounds like quite the sugar high. The duo is out on tour with Against Me! right now, but expect them back playing in town sooner or later...often where you'd least expect them. For those already part of the vLES community who were out of town this weekend, the concert will be broadcast at the virtual Cake Shop soon.

Justin Timberlake is a Total Cheeseball
So here we are, crowning Justin Timberlake the new Prince of Pop all year long, oohing and aahing over everything him and new BFF Timbaland touches, completely accepting that the former lame-ass from NSYNC* with the big blonde afro turned into a completely respectable phenomenon as he grew up. And then we turn on HBO last Monday night to see the superhyped Futuresex/Loveshow concert filmed at MSG a few weeks ago, and it dawns on us...this guy is LAME. The goofy dance moves, the Mickey Mouse facial expressions, the instrument-playing pantomime and, worst of all, the completely mediocre filler tracks he labored through between hits. Yes, he has 3 unbelievable jams (Cry Me a River, My Love and Dick in a Box...to be exact), but beneath this nu-sexy exterior is the same mass-marketed boy band kid from Orlando. And live, seeing it close up in high def, it’s clearer than ever. While we admit to being as caught up in the hype as anyone else, it all came into place while watching this special. Dude's still just an act. And a corny one, at that.