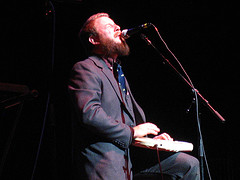 Bookeaters Return!
What started off as an excellent concert lineup just got better and better as the date approached. The additions of Spoon's Britt Daniel and Kevin Drew were a bonus treat. Music, reading and charity aside, perhaps the biggest wow moment was show headliner Jim James' new closely cropped haircut. The My Morning Jacket front man sheared his trademark Muppet locks since the last time we've seen him about. Not that it affected the music in any way, which nearly stole the show from some other very capable performers. Check out more thoughts and pics at BV and Stereogum, and check out our interview with 826NYC's Sarah Vowell. (pic via Muzicspy's flickr)

Feist Fills the Pool
Miss Feist has had a busy week around these parts. Aside from the aforementioned Bookeaters reading and the previously posted Letterman appearance, she headlined a sold out show at McCarren Pool, featuring an opening set by her old friends Broken Social Scene (mostly performing songs off Kevin Drew's new album) and more recent pals Grizzly Bear. Taking into consideration that her scorching hit (and Verizon jingle) My Moon My Man was our jam of the summer, this was a fine way to take the pool season into the home stretch. Three more shows planned through September (maybe ever?) with Modest Mouse, Gza and the Chemical Brothers closing out the season.

The Boss Still Rules
I doubt a fan would expect anything less from the man who now has well over three decades of hits under his belt, but the new single off his upcoming album, Magic is a an absolute killer track. Radio Nowhere debuted this week as an free iTunes download and it's one of his best songs in a long long time. He’ll be hitting the road this fall with the good old E-Street Band for the first time in five years, taking two passes through the area. They’ll be at Continental Airlines October 9th and 10th and MSG the 17th and 18th (not CMJ affiliated, we assume…). While you wait for the return, check out this classic video of the boys performing Thunder Road in ‘76. I guess we’ll see if they still got it in a couple months...