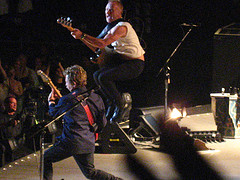 The Police Raid MSG
The Police have always had a close association with New York City, what with the CBGB breakthrough show and whatnot, so it was a bit surprising that it took them so long to get here on the reunion path. Nonetheless, halfway through their big comeback tour, the classic trio has finally stepped foot on our local soil. As Bumpershine described, it may not have been the most amazing performance ever, but the boys can still put on one hell of a show and the greatest hits catalog of songs they've amassed speaks for itself. They're back at the Garden tonight, then will return one more time on Halloween. After that? We’ll see how much longer they’re able to stand each other…
(pic via Muzikspy's Flickr)

BK goes back-to-back-to-back in BK
Perhaps inspired by ATP's "Don't Look Back" Series (or perhaps because it's just a cool idea) Ben Kweller decided to play three nights in a row in the borough he calls home. Each night he took an entire album from his discography and played through it, front-to-back. We went for "On My Way" night, and despite not being particularly familiar with much of his work going in, walked away from the show with a big grin on our face. He dedicated a song to his veterinarian (in attendance), let the audience pick the encore songs out of a box and handed out programs at the door with the full album's lyrics to follow along. His particular brand of aww-rock was inspired, and we're happy to have been there.

Tegan & Sara Run The Con Backwards
One night after Kewller finished up his run, Tegan & Sara sold out another night at the overcrowded Park Slope club to play their latest album in its entirety. They did it backwards, starting with the last song from their latest album and working back to the opening track. The chatty twins managed to cover the entire new record (followed by a handful of older hits) in just under 2 hours. Despite the embarrassing amount of crowd noise throughout the entire set, these girls have put out one of our favorite records of the year and it was a treat to hear all the songs live at once. They'll be back at the far bigger Webster Hall in a few months.

#As
#ben kweller
#city
#cmj
#flickr
#gothamist
#gothamist house
#halloween
#house
#Look Back
#msg
#Music
#new york
#new york city
#park slope
#photos
#police
#run
#sponsors
#The Police
#webster hall
Do you know the scoop? Comment below or Send us a Tip
A new Gothamist is coming! We’ve moved comments over to our beta site. Click here to join the conversation and get a preview of our new website.