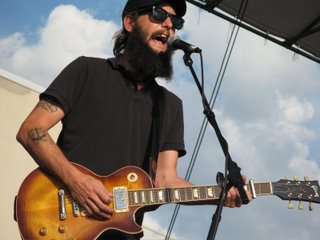 Band of Horses at the Pool, Another Great Show
It’s getting a bit repetitive. Every week it seems like we rave and rave about how impressive the Pool Party was. This week brought Band of Horses back to New York for a big free happy show, alongside last year's premiere blog buzz band, Annuals. While there were few complaints about last Sunday, Jelly's got themselves quite the tall order coming up this week. TV on the Radio will perform, and there is a complicated RSVP/Line system to ensure you'll maybe have a chance to get in. At some point. Maybe. We can't figure it out, so just show up early either way and prepare to bitch about it in the comments on Monday.
(pic via Ear Farm)

Hanson, Still Ear-Splittingly Popular
Perhaps deemed by many as a decade old one-hit wonder, the band has been going strong long since MmmBop left the airwaves. There is a large and extremely dedicated following for them, and they came out in their high pitched droves on Wednesday night at Webster Hall to celebrate the release of their new album, The Walk. The boys played a 2 hour set consisting of jams off all 7 of their records (No This Time Around though! One of only two Hanson songs we knew going into the show!) For what they are, there is no doubt that these fellas know how to put on an incredible show that could not have left a single fan in attendance disappointed. Color us extremely impressed. (And, in case you missed it, check our interview with all growns-up Taylor from earlier in the week.)

Grinderman Nearly Upstages The Stripes
Yes yes, everyone is talking about how great/not so great it was that The White Stripes played the big stage at MSG this week, but what has gotten pushed somewhat under the radar was the mighty impressive opening set by Grinderman. The US debut of this deep, sinister band is fronted by Nick Cave and backed by three graying, bearded guys who looked like they just crawled out of a swamp. Not that we didn't love the Stripes set, but we left that night wanting more Grinderman. Not even sure if this video really does them justice, as being in their presence is an entirely different experience altogether, but here they are performing their soon-to-be hit single, "No Pussy Blues."

#band
#blogs
#blues
#comments
#hanson
#interview
#love
#msg
#Music
#new york
#nick cave
#pool party
#radio
#The US
#The Walk
#The White Stripes
#this week
#tv
#tv on the radio
#us
#video
#webster hall
#Wednesday
#White Stripes
Do you know the scoop? Comment below or Send us a Tip