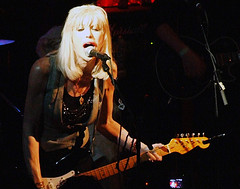 Courtney Love Performs at Hiro, Doesn't Cause a Scene
After GBH announced that Courtney Love was to play a free show at Hiro Ballroom, the biggest question besides what she'd sound like or how badly would Hiro screw up the crowd control, was what type of raucous scandal would Love cause during the set. Would she be trashed? Would she get into a fight? Would she show at all? Well, to the pleasant surprise of any real fan, the show went on without a hitch, and Love played a solid set of some old favorites as well as a bunch of new songs, many of which were co-written by professional hitmaker Linda Perry. Check out Freshbread for some pics (like the one above), and Ephemerist and Productshop for some more reviews.

T.I. Sucks
We were pretty excited to go see T.I. perform at the Hard Rock Cafe last night. To catch the reigning billboard chart topper perform in a space roughly the size of Bowery Ballroom was worth the trek up to Times Square on a hot summer school night. MTV was filming it for something, the tickets were cheap and it wasn't supposed to start too late. Well, sure enough, we arrive at 9:30 when the doors are supposed to open and there's a line of no less than 500 people streaming down 43rd street. At 10:00, when the show was supposed to begin (promptly, we were told), the line hasn't moved an inch. By 10:30, a security guard says they're not letting anyone in until T.I. shows up. T.I. wasn't even there yet?! He was supposed to be on stage a half hour ago! At this point, figuring how long it would take for the 700 or so people to get their tickets checked, empty their pockets and walk through the metal detectors, we were thinking this thing wouldn't happen until well after Midnight, if he even showed at all. So we cut our losses and just went home. Screw you T.I. for making your fans wait on you on the street, some of whom had traveled in from way out of town for what was supposed to be a special event. Anyone know if and when he ever showed?

826NYC Has Some Cool Friends
Tickets went on sale this morning for the latest 826NYC benefit series, Revenge of the Book Eaters. These concerts have been a massive success in the past, and this one appears to be no different. Jim James from My Morning Jacket, AC Newman from the New Pornographers and Grizzly Bear will perform music, Feist and Sarah Vowell will read and Demetri Martin will host the whole shebang. Below, check out a video from a Book Eaters show from last year, when Ben Gibbard and Colin Meloy performed Blur's 'End of the Century' in Seattle. Expect equally fun stuff here. Tickets are available now, and will likely go pretty quick, so buy buy buy!