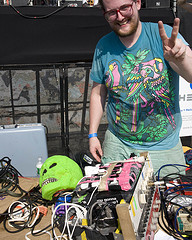 Deacon Rules the Pool
That's an awful, awful pun and we do apologize. These mini headlines aren't easy! The Pool Parties are officially in full swing, and we took a trip out to McCarren this weekend for the diverse lineup of OCDJ, Dan Deacon, Erase Errata and The Octopus Project. While all four bands put on a solid show, the standout was clearly Deacon, who set up his gadgets and widgets on a fold-out table at the base of the stage on the pool surface. The massive crowd (probably the largest he's performed for yet) all huddled around the table, as per usual, jumping and dancing and cheering along. There will be a constant adjustment period for Dan Deacon over the next year or so as he copes with playing intimate basement music to an ever expanding fan base. If Sunday's show was any indication, there may be some rough patches, but he'll always figure out a way to make it work. (pic via occipital lobe's flickr)

Live Earth in the Books
Whenever one of these big, world-dominating music events take place, the first reaction is contempt or disapproval. But for what it is (especially as people who have booked and organized a show or two in our day), Live Earth was a tremendous accomplishment that went off with hardly a hitch. We did not attend the Jersey concert, but watched much of it on TV (Universal HD all day, NBC at night) and thought it was done as well as one could hope for. Awareness was made, and while detractors say that holding these shows left a larger carbon footprint than had they never went down at all, surely the impression was felt around the globe that this is an issue worthy of something to be done on a massive scale.

Siren Schedule Revealed
We're one week away from the biggest musical boondoggle of the year! 8 days from now, thousands will make the annual indie pilgrimage down to Coney Island for the 2007 Siren Festival. This week, the official hour by hour schedule was released to the public, and most are pleased. It's worth mentioning that this year's fest features some really really good bands, and we are more amped than we've been in years to get down to Coney and take it all in. Some say that it's, top to bottom, the best lineup they've put together yet. We understand it's not easy to make it to the beach at 1:00, but this year, (the last year, perhaps?), it worth making the most of it. Check the full schedule after the jump... 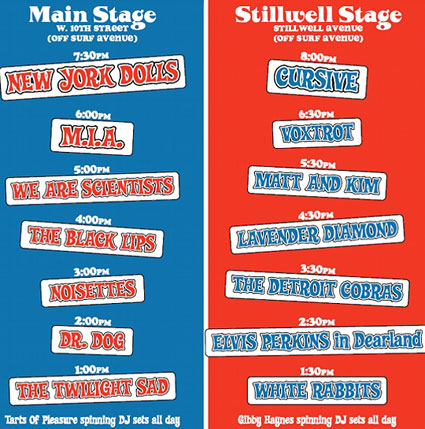