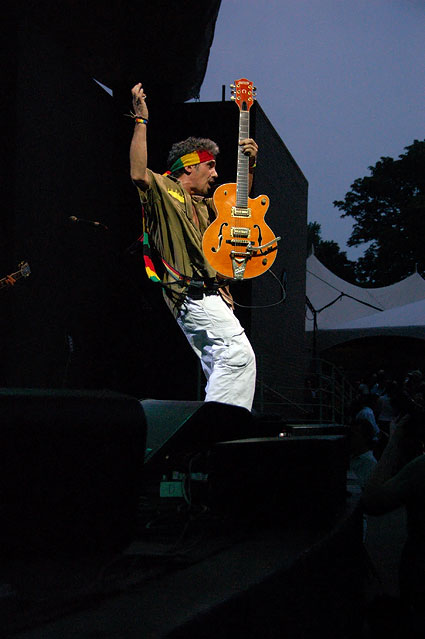 Manu Chao Beats the Rain
We never realized exactly what a force Manu Chao was live until experiencing him ourselves at Sasquatch several weeks ago. The man has the power to move people. To incite hysteria and completely dominate his entire audience. It is something any music fan should experience at least once in their life, because there is really nobody else like him performing today. Earlier this week, He did two nights at the Prospect Park Bandshell to a crowd that more resembled a soccer stadium than a rock concert. There was chanting and singing and air horns and flags, but none of that could beat back the rain, which poured down in buckets towards the end of the second night, drenching the fans and creating a lovely mess. Few would argue that after a hot night of dancing, there could have been no perfect release. Check out some more incredible pics (like the one to the left) over at Brooklyn Vegan.

Wilco Double Dip
Wilco spent two nights performing in our fair city this week. On Monday the band played a solid show to a sold out Hammerstein Ballroom, but they seemed to save the best for the hardcore fans, as the set one night later at Warsaw was nothing short of incredible. This was the show that went on sale at the Box Office only, so nearly everyone in attendance had gotten up early on a Saturday to wait in line for tickets. Needless to say, they were incredibly receptive and appreciative of the band, who in turn treated the fans to a powerful two and a half hour set. Despite the overcrowded venue and extreme heat both inside and outside the club, we doubt anyone could complain about seeing a band like Wilco in an intimate club like this.

Ryan Gets an Image Makeover
If you were fortunate enough to be in attendance at the Ryan Adams show at Hiro Ballroom Tuesday night (or checked any number of blogs the next day), you might have noticed that Ryan Adams has a new look. Gone are the t-shirts and jeans, the messy hair and, most interestingly, the guitar. The suddenly well dressed singer has chosen to completely focus on singing these days, while letting his backing band, The Cardinals, handle all the instrumentation. A surprising choice, for sure, but there is no argument that he sounds better than ever. Have a look/listen for yourself below, as he performs "Two" on The Late Show with David Letterman.