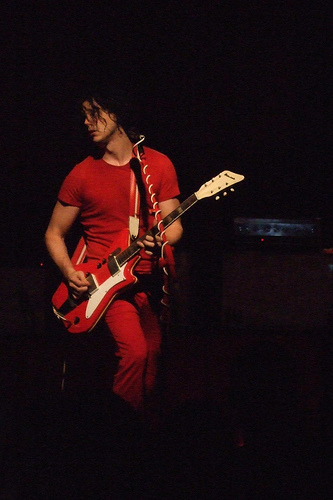 White Stripes Shred Irving
It seems that every time The White Stripes fade away for a year or two, people seem to forget exactly how amazing they can be live. Perhaps it takes a show like the one at Irving Plaza last Tuesday...filled with hardcore, line-waiting fans and eager and excited members of the media to really drive home just how good a show Jack White puts on, and exactly how impressive Meg is to keep up with him (though not everyone agrees). Those in attendance were in for a treat, as any time an arena band brings it down for a club show, it's always a spectacle. We were floored at Keyspan Park two years ago, and are excited to see them bring it to another level at the Garden next month. Read the reviews at Productshop, The Modern Age, and Stereogum, to (name a few in attendance.) (Pic Via DanFun)

Voxtrot Goes Large
We've been fans of Voxtrot for what seems like forever, and it was quite the thrill to watch them headline a fairly packed house at Webster Hall last Friday night. It'd be easy to talk about how much they've changed over the years, but the fact is that they're still the young, energetic and optimistic band that we saw back at Rothko a couple years ago. And that's a good thing! For a band that has come as far as they have, the fact that they don't approach a show in front 1000 people any different than they would for 100 is extremely refreshing. Even the addition of a string quartet to compliment the new songs felt natural, rather than excessive. They are not a band that will wow you with a flashy show and massive stage presence, but that's why we like them. They're the band that has always done it the genuine, correct way. For that, we wish them nothing but the best going forward.

Pool Parties Start This Weekend!
You know it's officially summer once the kids start lining up outside the McCarren Park pool on a lovely Sunday afternoon. That's right! The Pool Parties are back and, dare we say, better than ever? This year they've got TV on the Radio, Ted Leo, The Thermals, Blonde Redhead, Ghostland Observatory and a ton others, all for free. We expect to see the return of the dodgeball and Slip n' Slide, and can't wait to see what else they've got in store for this year (maybe easier access to alcohol?). This week catch Superchunk, +/- and Oakley Hall. The rest of the summer lineup can be found here, and if you need a refresher, check this video from the Beirut show last summer: