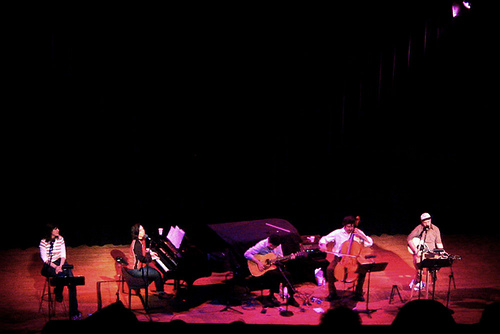 Magnetic Fields Attract Crowds to Town Hall
No "Lost" spoilers in this post. Stephen Merritt doesn't bring the band around too often, so it's always a treat when The Magnetic Fields take the stage in town. Despite the band hailing from Brooklyn, this is the first local show they've played in quite a few years, and the sold-out 4 night run at Town Hall did not disappoint the anxious fans. While their latest album, Distortion, casts a fuzzy haze over the otherwise deliberate, straight forward folk/pop tunes; the live show stripped them down completely, leaving nothing but acoustic instruments and voices. Every song comes across sharp, witty and with complete confidence, and manage to sound universally better then they ever do on record. (pic via coeur-sang's flickr)

Rock n' ROFL at Pianos
Brooklyn Vegan put together a successful little comedy/music hybrid show last night at Pianos, cleverly titled "Rock n' ROFL." The show featured a handful of up and coming bands with some lower-profile funny-people balancing out the set. The soft-voiced Peasant started off the show, showing off songs from his new album which were quite good. Maybe reminiscent of a more stripped down Sufjan or Elliott Smith, but with a slight and surprising emo edge to him; sounded fantastic. After a comedy interlude The Forms came on, blasting through a throbbing and mathematically impressive set. This morning, perhaps in direct response to their utter awesomeness last night, the band announced they will be performing at the PLUG awards at Terminal 5 in a few weeks. Tickets are back on sale. 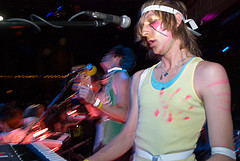 Apes and Androids are Gaining
Meanwhile, last night on the other side of town, Apes and Androids once again proved that they are in a league of their own when it comes to local band production values. The retro revivalists took the stage after midnight at the weekly Cheeky Bastard party at Hiro ballroom. Rather than succumbing to the limitations of the lousy venue, they completely blew it away -- using fog, lights, glow sticks, spandex and eye makeup to maximum effect. And with their debut album getting raves from everyone who has had the chance to listen (including Rolling Stone, for what that’s still worth), it appears the tunes are now there to back up the presentation. Look out for them at even bigger venues this Spring. (pic via Phillip C. Kim)