Gothamist's Week in Rock: The Slowest News Week Ever Edition 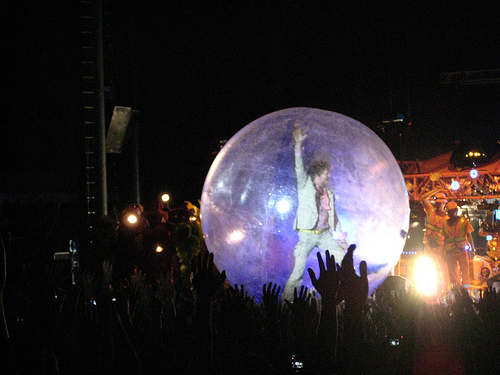 Naked Sasquatch Stomp
The Pacific Northwest's Memorial Day tradition continued once again with this season's Sasquatch Festival. The lineup was superb, featuring the Cure and R.E.M., amongst many many others across the multiple stages. While the gorgeous natural backdrop of the main stage at the Gorge usually gets all the attention, the post-fest chatter mostly revolved around The Flaming Lips. Never afraid to tack on another gimmick to their already circus-like live show, Wayne Coyne summoned a handful of naked ladies (link NSFW) to the stage during the set. There's no question that the Lips Ringmaster is a talented musician and excellent performer, but this is just sort of creepy. While it's always a thrill to see them live, especially for the first time, it might be time for them to try and mix up the show a bit? Coyne can only climb into that same bubble so many times before you just wanna see something new. Rather than adding questionable content on top of itself, the band might be due for a reboot. Especially if this sort of stunt is the kind of fresh ideas he's coming up with these days.

You Enjoy your Phish Reunion?
Slow news week? You betcha! In an interview with Rolling Stone, Trey Anastasio drops a major hint that the gang could be back together sooner rather than later. He now admits that breaking up wasn't such a good idea after all, and the idea that he ever wouldn't want to play Phish songs everyday seems painfully shortsighted in hindsight. While granted, touring with an incredibly successful band beats doing prison time for a painkillers possession rap that he potentially faced at the time, the writing on the wall is there. These guys clearly feel like the breakup was way premature, and while they passed up the chance at the Jammy Awards to pick it back up a few weeks ago, it won't be much longer now -- perhaps at the Rothbury Festival this year.

NKOTB Would Like Some of your Stimulus Check
Have you heard about the McCarren Pool Parties lineup yet? How about Staten Islands' Rock the Harbor Fest? Okay then, what about...The New Kids on the Block tour!? After their incredibly predictable and mostly depressing reunion on the Today show a little while back, and the release of a new single, "Summertime," the old boys will be hitting the road this fall to try and recapture some of their old "glory." While the timing is suspicious, what with the music industry in shambles and the boy band era now nearly a decade old, perhaps the New Kids saw bands like My Bloody Valentine and the Breeders back out there and said, "Why not us?" Or maybe they were just collectively short on dough, much like the rest of the nation, and decided to cash their reunion chips. Anyway, the surprisingly inexpensive tickets ($75 or less!) go on sale Monday morning for their show at the Garden in October. If this is your kind of thing, by all means...

#flaming lips
#Music
#new kids on the block
#nkotb
#phish
#sasquatch
#week in rock
#You Enjoy Myself
Do you know the scoop? Comment below or Send us a Tip