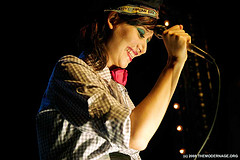 Karen O is a Native Korean
Out of the blue, Karen O announced late last week that she was going to play two shows at Union Pool on Monday night. Not as her normal role as front woman of the Yeah Yeah Yeahs, but with a new band called Native Korean Rock & The Fishnets. The two back-to-back sets contained all new material and a fresh new sailorsuit-clad backing band plucked from other local bands like the Mooney Suzuki and Jon Spencer Blues Explosion. There's no word on anything coming up for these guys, but this likely won't be the last we hear from NKR. Likely any upcoming shows will spring up as suddenly as these two did.

Todd P's Super (Sweaty) Show
Also on Monday, a bit deeper into Brooklyn, Todd P put together one of his finest lineups of the summer at the Market Hotel. The show kicked off with local favs The Muggabears, then went to the Art-Emo legends of Joan of Arc, followed by up and coming buzz bands Ponytail and Mae Shi. The Death Set was also on the bill, but showed up way too late after many had already cleared out on the school night. While all the bands were varying degrees of awesome, the most memorable aspect of the show, for better or worse, was the HEAT. The makeshift loft venue might have been the perfect place to take in these bands, but the place was like a sauna inside, leading many of the gentlemen in the audience to strip off their shirts and spray beer into the crowd. Even it that doesn't exactly sound like your idea of a good time, it was quite the unforgettable scene for a summer weekday in Bushwick. Bands like these deserve a crowd like that.

Pool Parties, more like a Hot Tub
If standing out in the sweltering heat all day Saturday for Siren wasn't enough sunburnt rock for your weekend, The Pool Parties came through Sunday with another full day of sweatjams. The pulsing drones of Liars and F**K Buttons did their best to compliment the steamy day out at McCarren Pool. Their music is forceful and persistent and further punished those who chose to leave the comforts of home for an unprotected cement bowl on one of the hottest weekends of the year. Also, those who were willing to tolerate those conditions will be happy to hear that another McCarren Pool show has been announced in August, with the stacked alt-folk lineup of The Felice Bros, Langhorne Slim, Eli "Paperboy Reed and Deer Tick. No promises that the weather will be any more forgiving on August 10th when these guys take the stage, but honestly, could it really be any worse?

Also this Week:
Naumberg Bandshell?
Feist vs. Miley Cyrus
Central Park Concert Figures Were Mostly Made Up
50 Cent Sues Taco Bell
An interview with Mike Gordon
Pics from a day at Siren

Photo via The Modern Age.

#karen o
#Market Hotel
#Native Korean Rock
#todd p
#week in rock
Do you know the scoop? Comment below or Send us a Tip