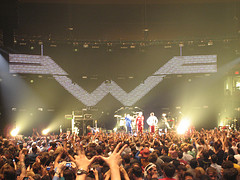 Weezer Play our Heart Songs
Weezer has always felt like the biggest personal band ever. The type of group whose fans don't seem to realize how many other millions of people have had the same emotional relationship with their music over the years. So seeing them headline Madison Square Garden, maybe a decade past their prime, but with 18,000 fans singing along to every word, was an strange scene. A band that has always thrived on being small and intimate was forced to connect with a nearly full arena. And while a Weezer show can almost run on auto-pilot these days, with their timeless tunes doing most of the heavy lifting, there was still a curious void between the performers and the fan experience. Granted, this awkwardness is part of their charm, but in contrast to the sharpness of their now time-worn classics, it doesn't seem to add up. How can they seem so unsure of themselves while performing some of the greatest songs of a generation?

My Bloody Reunion
It's amazing to think that My Bloody Valentine and Weezer's breakthrough albums only came a few years apart in the early 90s. Yet since then, while Rivers and Co. plugged on to mixed results, MBV basically disappeared, letting their legacy grow to mythical proportions. Their 1991 album Loveless is now found on the top of many "BEST ALBUMS EVER" lists, and a cry for their reunion has been loud and persistent from their hardcore fans for years. This summer, they finally got back together with a series of shows throughout Europe. Last weekend, they curated and headlined the ( potentially bedbug ridden) All Tomorrow's Parties festival in upstate NY, then came through town to play two shows at Roseland. Their return was generally well-received and expectedly loud, but most interesting may be that they have a new album in the works, which picks up from where the band left off with unfinished material from 10 years ago. It's no easy task to recapture that sort of magic a full decade later, but they will give it a go.

Cut Copy Dances Through the City's Slow Nights
For a band like Cut Copy, scheduling an international tour, with daily stops, must not be an easy task. Many bands can get away with playing a show on a Sunday or Monday night, since nothing too demanding is ever asked of the audience. But for an act whose principle purpose is to make people dance, these are the tough ones to schedule. This time through, NYC drew the short straw and hosted the Aussies at Webster Hall to start the week. While both shows sold out fairly easily, and there is no shortage of people not afraid to let loose on a school night, the shows did lack a certain energy that the band has previously been able to bring. Cut Copy’s latest is one of the best albums of the year, and they perform the songs as well as can be expected, but it was a tough sell on an off night.

Also this Week:
An interview with Crystal Stilts
The MP3 Experiment Returns
An Interview with Kyp from TV on the Radio
Kim Gordon Designs Clothes
Eurythmics' Dave Stewart Buzzes by The View

#Cut Copy
#my bloody valentine
#week in rock
#weezer
Do you know the scoop? Comment below or Send us a Tip