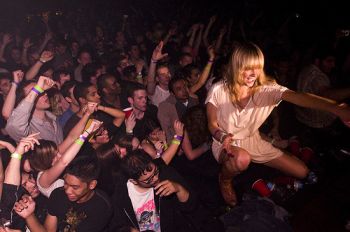 GBH Turns 10, Throws Party
Considering most parties have a hard time getting through a summer in this town, the fact that GBH has been doing their thing for 10 whole years is an incredible achievement. These guys have been hosting parties in just about every space available, from the high end hotels to the low brow clubs. To celebrate the anniversary, they blew it out in spectacular form last Friday night, taking over Webster Hall's main ballroom for the evening with an impressive collection of DJs and dance acts. MSTRKRFT (pictured), James Murphy, Grandmaster Flash, among others hit the decks till the early morning, and while there was no secret LCD Soundsystem set (as rumored), few seemed disappointed with what was an completely raucous night. Here's to another 10 years.

Indie Rock Bloggers Win Indie Rock Trivia Contest
To the shock of exactly no one, bloggers know more about indie rock than your average plebe on the scene. On Wednesday, Les Savy Fav and equally bearded Zach Galifianakis hosted an evening of Indie Rock Trivia at the not very indie Highline Ballroom. The show was part of New York Mag's NYxNY series, which has put on several unique events over the past year. The winners of the quiz portion was a team consisting of members from Stereogum and Productshop; but the real winners were everyone in attendance, who got treated to a killer set from LSF complete with all the costume changes and stage antics we've come to expect from the post punk legends.

American Idle
The worst season of American Idol is over. Universally panned as being boring, talentless and potentially fixed, the showdown of the two Davids came to a head Wednesday night. In one of the rare shocks of the season, creepy child star David Archeletta got blown out by the post-grunge Daughtry-esque David Cook. Will this signal a change in the shows format? The "Rocker" contestant usually sticks around for a few weeks as a popular novelty, but they always fall to someone who fits into the show's normal conventions. Perhaps more theme show weeks will cater to these contestants going forward. With this season's ratings down, compared to previous years, a shakeup certainly couldn't hurt; and until then, we look forward to hearing out of tune selections from the Creed songbook.