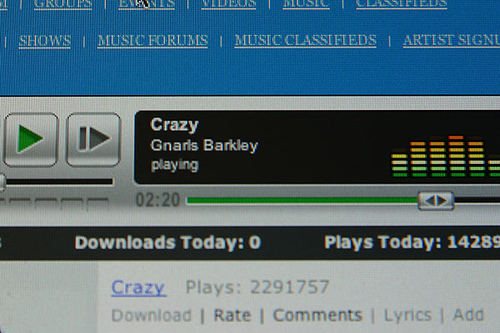 Gnarls Barkley Play the Internet, in Person
Gnarls Barkley is perhaps the most notable one-hit wonder of the internet era, so it's fitting that they played a couple free geek showcases at the tail end of NYC's poorly defined "internet week." On Sunday they were at the Fillmore/Irving to play the 150th Free MySpace show to a group of fans who started lining up a good 7 hours before showtime. Then on Tuesday they hit up the Apple store in Soho to play a stripped down mini set to the people who prefer to download, rather than steam their tunes. Gnarls may never be able to escape the shadow of the mega-breakthrough success of Crazy, but it won't be for lack of effort or fan service. They have never masked their intentions to embrace the internet to further the band's success, so these shows really did feel like they were giving back, in a way, to the culture that made them a household name in the first place.

MMJ @ MSG on NYE
So, now that the summer music calendar is more or less all set, it's time to start turning the focus towards New Years! Really! Wait...you mean you haven't set your New Years Eve plans yet? Well, fans of My Morning Jacket now have exactly two weeks to decide if they'll have anything better to do on December 31st than go see them at the Garden. The band will be headlining "The World's Most Famous Arena" to ring in the last year of the decade, and tickets go on sale in exactly two weeks. In the meantime, if you are somehow unconvinced that these fellas can put on a Rockin' New Years Eve, it might be worth trying to find a way into their sold-out Radio City show next week. They rarely disappoint.

Bonnaroo Begins
The Bonnaroo Music and Arts festival kicked off in Manchester, Tennissee last night with a slew of local New York acts to get the weekend rolling. Nicole Atkins, The Felice Brothers, Battles, The Sword and everyone's favorite/least favorite new band Vampire Weekend all fought for the early arrivals attention. Lez Zeppelin also performed, though it's unclear if Robert Plant, down there to perform with Alison Krauss later this weekend, bothered to check them out. Speaking of...there have been some persistent rumors that there really will be a Zep re-reunion at the infamous Superjam tonight, so keep your ears perked. If you can't make it down, select bands will be streaming live all weekend. It's just like being there, without the hassle of port-o-potties!

#Bonnaroo
#Gnarls Barkley
#Music
#my morning jacket
#week in rock
Do you know the scoop? Comment below or Send us a Tip