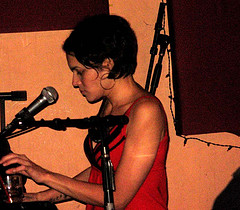 Norah Does it in the Living Room!
Perhaps in an effort to capitalize on some pending April Fools Day confusion, (or, less cynically, to honor the cozy club,) Norah Jones made a surprise appearance at the Living Room on Monday night. The Ludlow street lounge, which has been celebrating its 10-year anniversary with night after night of packed lineups with a sprinkling of some big names, is where the Queen of Mom Music got her start many years ago.

Jones's return was a tribute to the always welcoming club for giving her, as well as hundreds of other performers over the years a comfortable place to play. She performed as The Little Willies, a low key side project formed at the very same club a few years back, along with a handful of friends by her side. While there’s no word yet on the return of El Madmo, her blonde-wig-wearing “punk” band, its great to see her back to her roots again, nonetheless. (pic via Rafe Baron's flickr, during a previous NJ show at the Living Room)
UPDATE: Speak of the Devil! Brooklyn Vegan gives the heads up that the aformentioned El Madmo just announced today that they have an album coming out soon! RANDOM.

Vanderslice Does it On the Floor!
Now that John Darnielle has finally broken out and gone on to do (relatively) big things with the Mountain Goats, the debate for most underrated contemporary songwriter shifts towards Mr. John Vanderslice. He was a busy man last Monday, playing his first of two shows at Bowery Ballroom, opening for Stephen Malkmus, and then setting up right next door to Norah at Pianos for the Rock and Rofl II show.

The headlining set spent a few songs up on stage, like usual, before coming down into the crowd for a completely unplugged, acoustic performance in the round. While this may seem like a cliché or played out concert gimmick, Vanderslice pulled it off with the honesty and earnestness of one of his songs, commanding complete silence from the crowd as he and a few of his friends jammed out together like they were sitting out on the quad on an early spring day.

R.E.M Does it…With Relevance!
If you weren't paying close attention, one might assume this is some sort of comeback/reunion for the legendary Athens band. Not so--they've just been going through the motions for the last decade or so, leaving this once-revered band somewhat of a worn out shell of what they once were. But, not unlike the approach Pearl Jam took when they released their last record, the marketing strategy this time around it that they care again.

Even if they never broke up, or stopped touring or making records, REM is acknowledging the fact that they've slipped over the years, and are trying to do better going forward. This recent push started with a SXSW appearance, in an effort to reach all the way back to their indie/college rock roots, and culminated this week with an appearance on the Today Show, which is arguably the most mainstream stage in America. With a big tour with Modest Mouse and The National on the horizon and what looks to be a reasonably well received album out this week, can they call it a comeback, even though they've been here for years? Why not. The music world is a better place with a relevant R.E.M. in it. Tickets for the MSG and Jones Beach shows go on sale tomorrow.

#concerts
#John Vanderslice
#new york
#norah jones
#rem
#review
#rock
#stephen malkmus
Do you know the scoop? Comment below or Send us a Tip
A new Gothamist is coming! We’ve moved comments over to our beta site. Click here to join the conversation and get a preview of our new website.