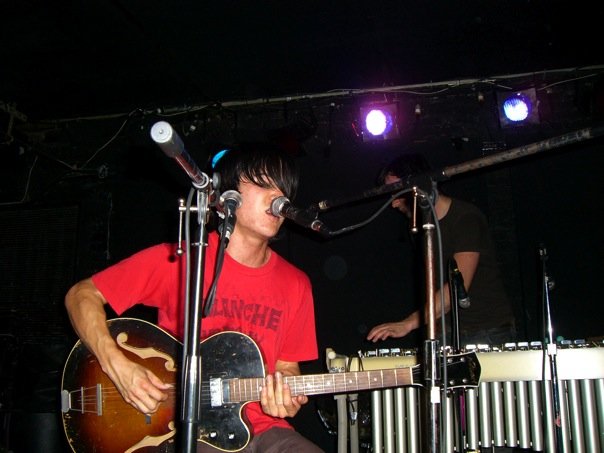 The Dodos are Far from Extinct
The Dodos are about to enter a very interesting phase of their career. The breakout guitar and drum duo (with a provisional third member) are a simple, intimate band. The two of them sit very close together, quietly strum and bang away, and perform like nobody's watching -- which is part of their appeal. You get the sense you've walked in on something you're not supposed to see. So what happens when a band like this really blows up? The Mercury Lounge was packed to the gills on a Sunday, and one should expect them to play only larger rooms from here on out. Will they take the same show to the big stage, potentially losing some of their appeal? Time will tell as the expectations grow. (pic via ...I made a blog)

Live from New York, it's Pitchfork TV!
For a site based in Chicago, Pitchfork has done a fine job of staking their claim in NYC lately. With the launch of Pitchfork.tv, their new comprehensive video site, they've made themselves at home in our fine city. Much of their early content features some of their favorite bands performing with the city as their backdrop. Metal-punkers Jay Reatard filmed a set in the slanty confines of the Cake Shop, A Place to Bury Strangers showed up at Todd-P favorite Death By Audio, and The Thermals shot a stunning video on the Pitchfork NYC HQ rooftop for their "Don't Look Down" series. Don't be surprised if you see some P4K video crews slumming around your favorite jaunts in the future. For a taste, check out one of the rooftop Thermals videos after the jump.

Explosions in the Five
No room is too loud for Explosions in the Sky. The instrumental Austin quartet played everyone's favorite venue, Terminal 5, last Wednesday -- and they completely dominated the boomy space. Before starting they announced that this was their largest headlining show ever, and were thrilled that a sold out crowd was there to greet them. Their sets always being nothing short of historically epic, they made the most of the massive crowd by burning through 90 minutes of favorites from their last few albums. Perhaps most impressive was how generally well behaved the crowd was. For a long, standing room only set, with no words or extended breaks, the room stayed relatively quiet and well behaved the entire time. For all the knocks against the club, everything seemed pretty spot on this time around.