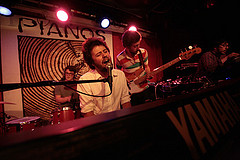 Passionate for Passion Pit
At what feels like one of the most hyped Pianos residencies since the Cold War Kids or Clap Your Hands Say Yeah, Passion Pit played their second of three consecutive weekly shows at the bar this week to another sold-out room. The white-hot kids from Cambridge, Mass play an indie-dance hybrid sound that feels remarkably light and fresh for such a recently tired genre. Michael Angelakos' piercing, almost feminine falsetto punctuates the mix of electronic beats and live instruments, creating a supremely listenable sound. Their debut EP comes out in a few weeks, and it'd be highly recommended to get tickets now for next weeks show while they are still available. This is certainly a band to watch.

Muxtape gets Despooled
Muxtape, the popular site which allowed the creation of personal online mixtapes to be streamed by friends and fans, was taken offline this week. The message that greets you when attempting to log in states that they are sorting out a problem with the RIAA, although a brief statement on Muxtape's blog insists that no artists or labels have complained. While it was never a threat to seriously damage the record industry or anything, that was never Muxtape's purpose. The idea was to use its very limited interface to recreate the culture of sharing mixtapes amongst friends, and move it onto the internet. From the optimistic sound of their statements, insisting the site will be back up shortly, these limitations might be what save them from some serious trouble in the end. Perhaps the RIAA can see the personal benefits of a site like this? There is no doubt that there are plenty.

Leroi Moore Dies
Earlier this week, Leroi Moore, saxophonist for the Dave Matthews Band, died due to extended complications from an ATV accident earlier in the summer. Regardless of what you personally think of the band, it is pretty much impossible to ignore the Dave Matthews Band in today’s musical climate. One can count the number of contemporary bands capable of headlining a stadium tour on one hand, and these guys are up there. The loss of one of its founding members is a big one. It is unclear as of yet who will take over full time sax duties, as the band continues on its Summer tour with temp replacement Jeff Coffin.

#dave matthews band
#Leroi Moore
#Muxtape
#passion pit
#week in rock
Do you know the scoop? Comment below or Send us a Tip
A new Gothamist is coming! We’ve moved comments over to our beta site. Click here to join the conversation and get a preview of our new website.